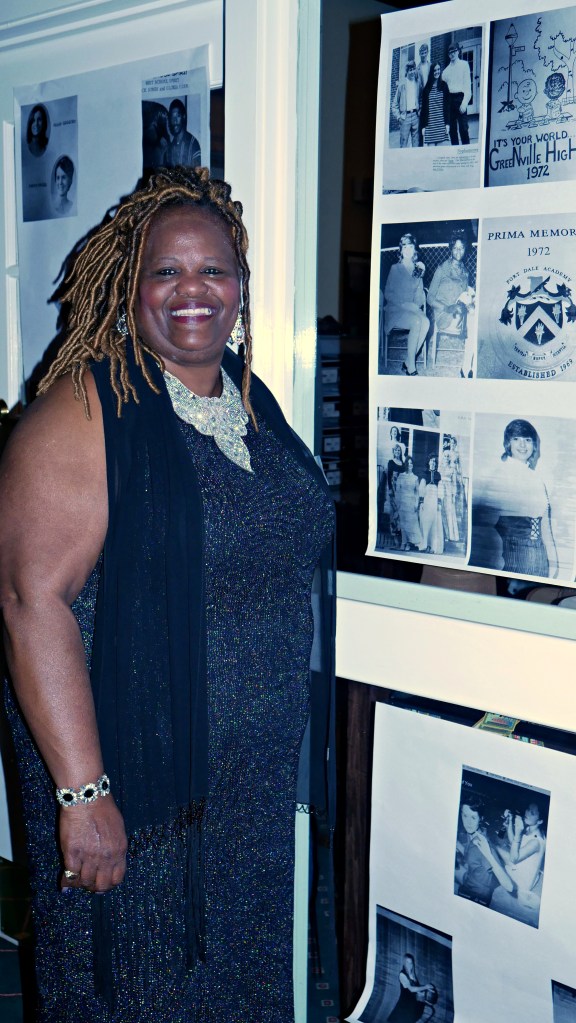 Sometimes you make history, and you don’t even realize it in the middle of your special momen
That was the case for Joyce Rhodes Buskey. Turn back the clock to the early 1970s, when integration was still new to Alabama’s public schools.
As a senior at Greenville High school, Buskey recalls how exciting it was to come home and tell her mom that she’d been selected as one of the class of ‘72’s homecoming maids.
“I think my mom pretty much sat down at her sewing machine as soon as she could to make me an outfit for homecoming. It was such a great honor to be chosen by my peers to be a maid,” Buskey said.
“I honestly didn’t think I’d be chosen queen. But I guess somehow Mom knew it in her heart.”
Buskey fondly remembers the fun of the big homecoming parade that Friday afternoon before the game, riding on a float with all her fellow maids and waving to the crowds lining Commerce St. in uptown and downtown Greenville.
“I was surrounded by the beauty of the other girls and the float itself, and it was all so much fun,” she said.
That night, Buskey and her fellow maids entered the football field at half-time on the arms of their escorts.
“We did not know who would be queen until we were actually on the field,” she explained.
And then the announcement came.
“When I saw Principal Harrison approaching me with that crown and flowers, it’s a good thing I had hold of my escort, the late Lloyd Robinson’s arm—otherwise, I might have collapsed,” she admits.
“I was just so surprised and happy to be my school’s homecoming queen. I didn’t think about it being any kind of milestone.”
But it was. With her crowning on that crisp fall evening in 1971, Joyce Rhodes Buskey became Greenville High School’s first African-American homecoming queen.
Although she had no inkling of the significance of that queen’s tiara being placed on her head that night, Buskey now sees the importance of other young girls and women of color seeing such opportunities are open to them as well.
“There were many more ‘firsts’ to be achieved, with several other black girls chosen as homecoming queen and, also, as Miss GHS over the years. I just unknowingly paved the way,” she said.
“I want these young women of color to understand they can achieve their dreams and desires, but to also seek to do so as a person of good character, with self-confidence and dignity.”
Buskey says many within the Camellia City community served as mentors and inspirations to her in her younger years, including her own mother, the late Josephine Rhodes, as well as the late Magnolia Brown, the late Ocelene Carter and her entire family.
“When I flash back to my days at GHS, I return to the classrooms of Mozelle Peagler, Frances Benson, Ruby Holifield Brown, Ruby Shambray, Emma Jean Shell, the late Levester Marshall, the late Georgia Lucas, and so many others who taught, encouraged and inspired me,” Buskey said.
After graduation, she went on to receive a business degree in stenography and accounting from Trenholm State in Montgomery, also studying at AUM and Alabama State University.
After over 16 years working at a private educational institution in Brewton, Buskey returned to her hometown, serving in the Butler County School System for another 28 years before retiring.
The trailblazing homecoming queen has come full circle. This active retiree enjoys helping others and participating in programs at her church, Old Elam Missionary Baptist Church of Greenville. She crafts, reads and sews, and is known for her year-round tree, decorated for a different season and holiday every month for family and friends to enjoy.
These days, her family is her greatest inspiration, Buskey says.
“I have three ‘kings’ in my life, my husband Steven, and my two remaining siblings, my brothers, Milton and Marvin. Those two are always checking in with me.”
And it was her proud brother Marvin who reminded everyone of his sister’s historic moment in a Facebook post.
“It’s been nice to be remembered for that moment, and to remember all the people who have inspired me on my journey,” Buskey said. “If I can be an inspiration to someone else, that’s a blessing.”