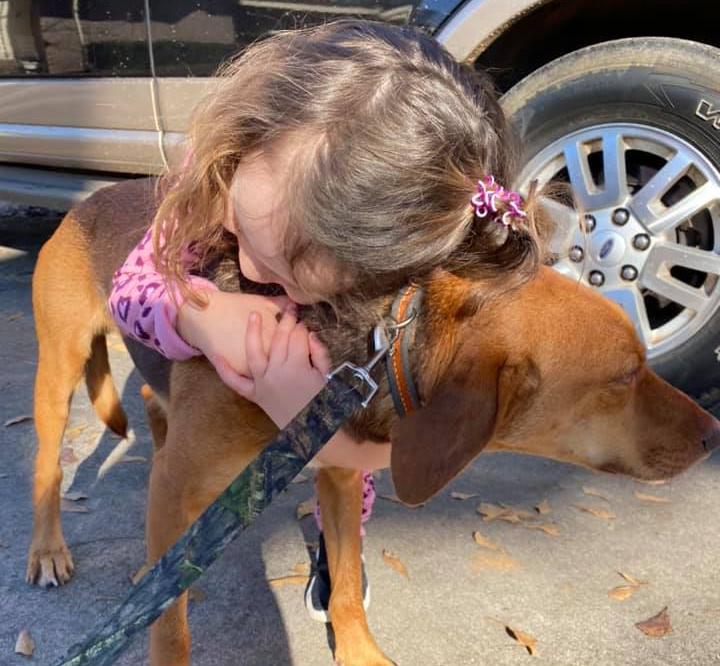 On Christmas Eve, the beloved brown hound dog of Hazlee Odom of Brantley went missing. Little Hazlee and her mom, Samantha Odom took to the streets and to social media to find their precious furbaby. On December 24, locals were having their annual fireworks show. Little Bo Duke, the brown hound dog didn’t care for the spectacular event. He was so frightened by the noise that he escaped from his kennel and took to the hills. The little rascal could not be found anywhere. At first, a few neighbors joined in the hunt and then came the faithful post to Facebook.

Samantha and Hazlee along with their “Find Bo Duke” followers have tirelessly searched and scouted wooded areas, hunting clubs, and dirt roads. Logging crews from around Brantley even stepped up to join the search, catching hints of Bo’s adventure. Residents on the Glenwood highway would catch a glimpse of the little dog, but by the time anyone could get to that area, he was gone. A couple of local hunters caught the little scamp on their deer cameras, but Bo Duke once again eluded his progressors.

After days of posts, phone calls, daily searches, and tons of prayers, on Jan. 5, 2021, Bo Duke, the little brown hound dog was found and is safe at home. In Samantha’s Facebook post you can hear the joyful sounds of the happy pup. Odom in her emotional post said that there are way too many people to thank. Samantha Odom’s post also brings restoration, “I believe God had a plan for us and Bo. Through this experience, a little mutt dog from Brantley, Alabama had his missing post shared more than 4,000 times in multiple states. I met kind people who restored in me that there are still good people with good hearts.”