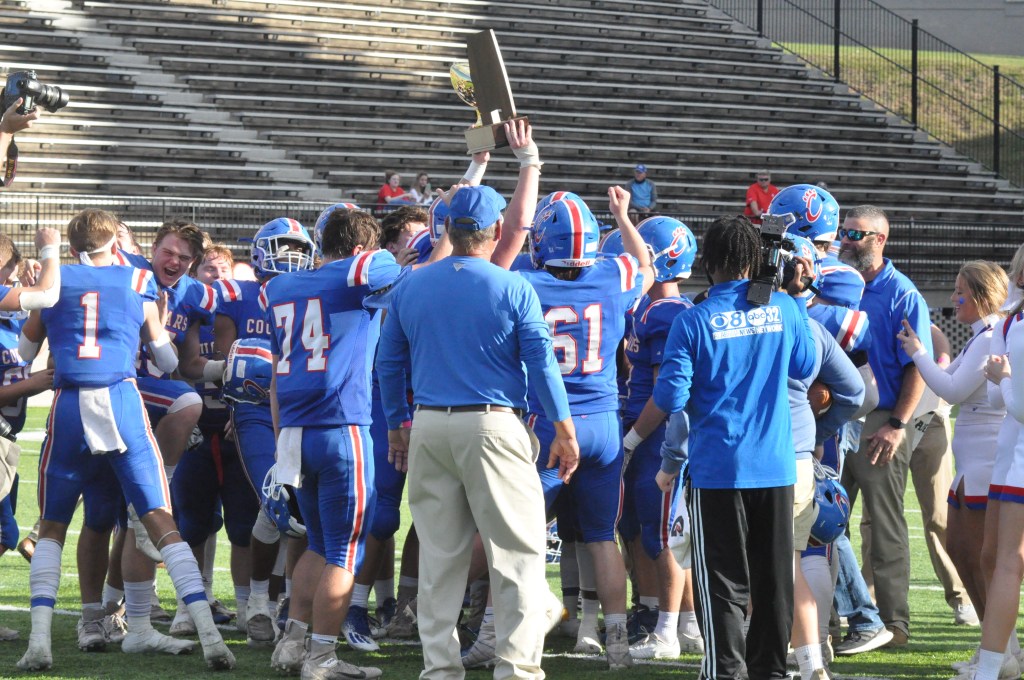 The Crenshaw County Cougars have won their first AISA state football championship since 1997, after defeating the Abbeville Christian Academy Generals 40-20 on Friday afternoon.

The first quarter started off sloppy for both teams.

ACA threw an interception to CCA’s John David Taylor on their first offensive possession of the game.

After driving the ball down to the ACA 21 yard line, Demetric Toney of CCA would throw an interception of his own – to which ACA would return to their own 24-yard line.

ACA’s second drive would end much better for them as running back Brandon Early would score a short touchdown run, putting the generals up 7-0 in the first quarter.

CCA would respond quickly, however. On their next drive, John David Taylor would take over, gashing the defense on several runs. He would cap off the drive with a 7-yard TD run. After a pissed 2-point conversion, CCA would be down 7-6.

Much of the second quarter was stagnant, as neither team could get on the board until ACA scored an 8-yard touchdown on 4th and goal with only seconds left in the half.

“I told the guys at half that we needed to step it up offensively. There was only so much we could do on the defensive side of the ball before we started to give up more points,” CCA head coach Wayne Grant said.

And CCA would respond on both ends of the ball in the second half.

ACA would fumble the ball deep in their own territory on their first possession of the second half. CCA recovered the ball, and afterwards, Quarterback Demetric Toney completed a 15-yard touchdown pass to Christian Holloway. After an unsuccessful 2-point try, CCA would trail 14-12.

CCA would come up huge yet again on the defensive side of the ball on ACA’s next drive. After a fumble by the ACA quarterback, Tymon Knighten would have a 53 -yard scoop and score to give the cougars the lead, 19-14.

However, ACA would respond quickly on their next drive with a 55-yard touchdown pass to give the generals a 20-19 lead midway through the third quarter.

But it was all cougars from that point on.

CCA’s John David Taylor would take over on the next drive, running up the middle for several big gains – including a 23-yard run.

Christian Holloway would cap of the drive with a 7-yard touchdown run. After a successful 2-point conversion, the cougars would lead 27-20.

There would be 6 minutes without a score from either team, as the game shifted to the fourth quarter. ACA would make a critical mistake with a fumble on CCA’s 45-yard line as they were driving the ball.

CCA would make the Generals pay as Toney hit Gage Messick for a 37-yard pass play down to ACA’s 7-yard line. Taylor would finish the drive with a 7-yard TD plunge to put the cougars up 34-20.

ACA was clearly beginning to become more and more tired as the game went on, opening themselves up to more mistakes. They would throw yet another interception to CCA late in the fourth.

To finish off the game, Taylor would have a 70-yard touchdown run – putting the score at 40-20.

“It’s really, really special to bring this championship back to CCA. The guys have worked so hard all season and I couldn’t be more proud of them,” Grant said.