Have you heard about the monkeys? 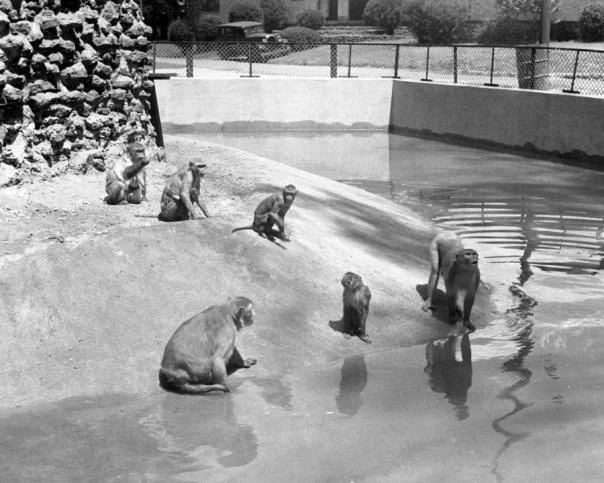 The stories are, in fact, true. Once upon a time, Beeland Park was home to a number of primates with their very own house and island.

Whether they were attending family reunions or birthday parties, going for a refreshing swim in the park’s pool or stopping by while out for a Sunday drive,  visitors to Beeland Park always seemed to head for Monkey Island.

“I remember coming from Luverne to Greenville in the early ’60s for Thompson family reunions at Beeland Park. The monkeys were a wonderful attraction at the park,” says Dr. Jean Thompson.

Vada Sexton remembers the monkeys as the “highlight” of every visit to Beeland.

“My granddaddy used to take me over to see them. I loved watching them swing on the ropes and giving them snacks,” Annette Cartwright recalls.

Sarah Still remembers Sunday drives to the cemetery with her aunt to put flowers on relatives’ graves, followed by a trip to Beeland Park to see the monkeys. “I loved those Sunday afternoons,” Still says.

Linda Morton, who regularly enjoyed swimming at the facility’s pool, says she and her friends never failed to walk over to the monkeys and feed them peanuts before heading home.

But just how did Monkey Island come into being?

It all started almost 80 years ago with some brainstorming on the part of local civic leaders seeking ways to attract more visitors to the county seat.

Monkee Island, which arrived at the city park in 1949, was meant to be just the first step of a small zoo planned for the Camellia City. The Greenville Rotarians made a sizable contribution to the project, with other civic clubs, the city and county governments all planning to be a part of the new zoo’s creation and upkeep.

Eight swimming Rhesus monkeys were ordered; a temporary cage would be constructed to house them until the moat and island for the monkeys were built. The plan was to add native wildlife like fox squirrels, bear, raccoon and wildcats to the little zoo from time to time.

The island would not be enclosed; it was believed the moat with its steep walls would be sufficient to keep the monkeys on the island, and thus give all spectators a clear view of these entertaining creatures.

The road to Rhesus monkeys making their home in Greenville was a bit—rocky.

Heavy summer rains that June interfered with building and painting the cage to temporarily house the monkeys. Then a large male monkey destined for Greenville decided to make a run for it, delaying the shipment from the zoo in Denver Colorado from which they had been purchased. And while he was running amok, a female monkey birthed her baby a lot earlier than expected and couldn’t go anywhere for at least three weeks.

Greenville got some unexpected press due to the runaway male, with the Denver Post running a front page article about it, and dailies around the country also carrying stories about the City Park Zoo’s “shrewd male who got wind of our plans, and escaped to hide in our artificial mountains.”

The next thing you know, the chairman of the local committee had to have an emergency appendectomy, rendering him unable to be on hand to welcome the monkeys once they finally arrived in the Camellia City.

The re-captured male and the rest of the monkeys, save for mama and baby who traveled to Alabama a few weeks later, finally arrived in late June. The town was a-twitter over its newest citizens.

By late July of 1949, The Greenville Advocate declared that “The Park’s the Place,” saying that the interest of the people of Greenville in Beeland Park was greater than it had ever been since the park first opened 15 years earlier.

Crowds were gathering to see the monkeys (still in their cage as they awaited completion of their moat and island). It should be mentioned a number of other improvements to the park had been made, with new ornamental plantings, barbecue pits and shelters, swings, electrical lighting and more added for park attendees’ enjoyment.

But the monkeys were definitely the star attraction.

In the coming months, Monkey Island and its moat were completed and many folks made the effort to visit R.A. Beeland Park and see Greenville’s own menagerie of monks at play.

All was not sunshine and bliss at Monkey Island, however. There were the cigarettes and escapees. And—did we mention the alligators?