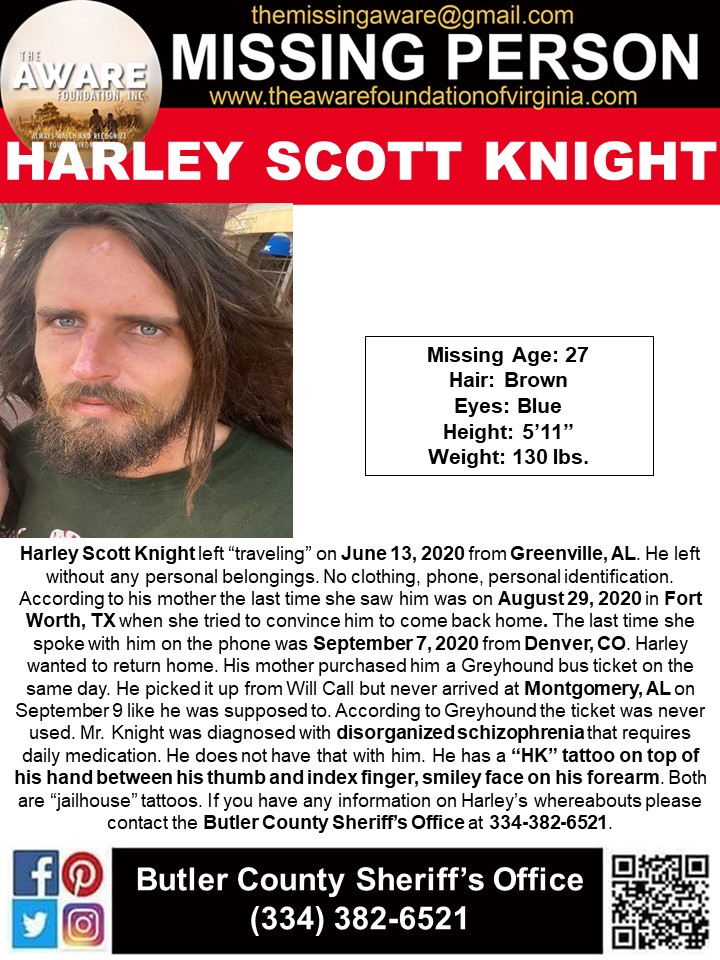 Authorities and searching for a missing Greenville man last heard from on Sept. 7.

Kenny Jarels, president of the AWARE Foundation said in a press release that Harley Scott Knight, 27, left Greenville on June 13.

Jarels said that Knight left without any personal belongings.

“No clothing, phone, personal identification,” Jarels aid. “According to his mother, the last time she saw him was on Aug. 29, 2020, in Fort Worth, Texas, when she tried to convince him to come back home.”

Jarels said the last time Knight’s mother spoke with him on the phone was Sept. 7, 2020, from Denver.

“Harley wanted to return home,” Jarels said. “His mother purchased him a Greyhound bus ticket on the same day. He picked it up from Will Call, but never arrived at Montgomery, Alabama, on Sept. 9, like he was supposed to.”

Jarels said that Knight was diagnosed with disorganized schizophrenia that requires daily medication.

“He does not have that with him,” Jarels said. “He has both a ‘HK’ tattoo on top of his hand between his thumb and index finger, smiley face on his forearm. Both are ‘jailhouse’ tattoos.”

Knight is described as a white male, with brown hair, blue eyes and stands 5-feet-11-inches tall and 130 pounds.

Anyone with any information about Knight’s whereabouts is asked to contact the Butler County Sheriff’s Office at 334-382-6521.