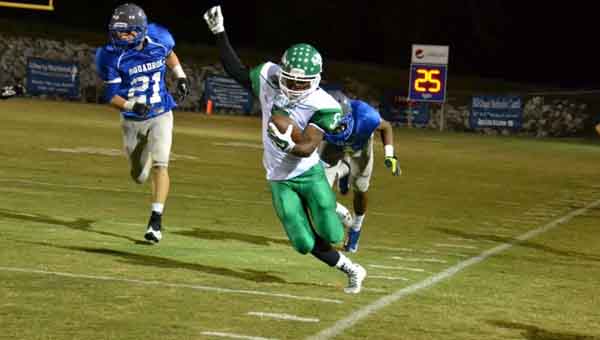 CONTRIBUTED PHOTO | CINDY JORDAN Brantley’s Corey Foster sticks inside the line as he makes his way to the end zone Friday at Highland Home School.

It’s remarkable how great of a season the Brantley Bulldogs have had up until this point.

After their 54-0 defeat of Pleasant Home this past Friday, the Bulldogs moved to 4-0 – but that’s not the impressive part. Brantley has still yet to allow a single team to score a touchdown on them. In fact, the only points they’ve surrendered all season came on a safety against McKenzie.

Brantley started the game off quickly with a 54-yard touchdown pass from Tucker Kilcrease to Daquan Pittman. Kilcrease would also find the endzone on the Bulldogs ensuing drive, scrambling for a TD and putting Brantley up 14-0.

Brantley would continue to pile it on in the opening quarter, as Kilcrease would find Westley Person for a 38-yard TD strike.

OLB Robert Shine would also find the scoreboard for the offense later in the game, cutting up the middle and running for a 56-yard TD.

The Brantley defense did what it normally does and forced turnovers and long yardage situations. Pleasant Home finished the game with 9 passing yards, -21 rushing yards, and -12 total yards.

Brantley, on the other hand, had another outstanding offensive outing.

Tucker Kilcrease finished the game with a 78.6 % pass completion for 194 yards, 2 TDs and no interceptions.

Daquan Pittman had 4 receptions for 87 yards and 1 touchdown, while Robert Shine finished with 2 carries for 66 yards and a touchdown.

Tucker Kilcrease was awarded player of the game.

Brantley (4-0) gets ready to travel Highland Home this weekend while Pleasant Home has a BYE week.