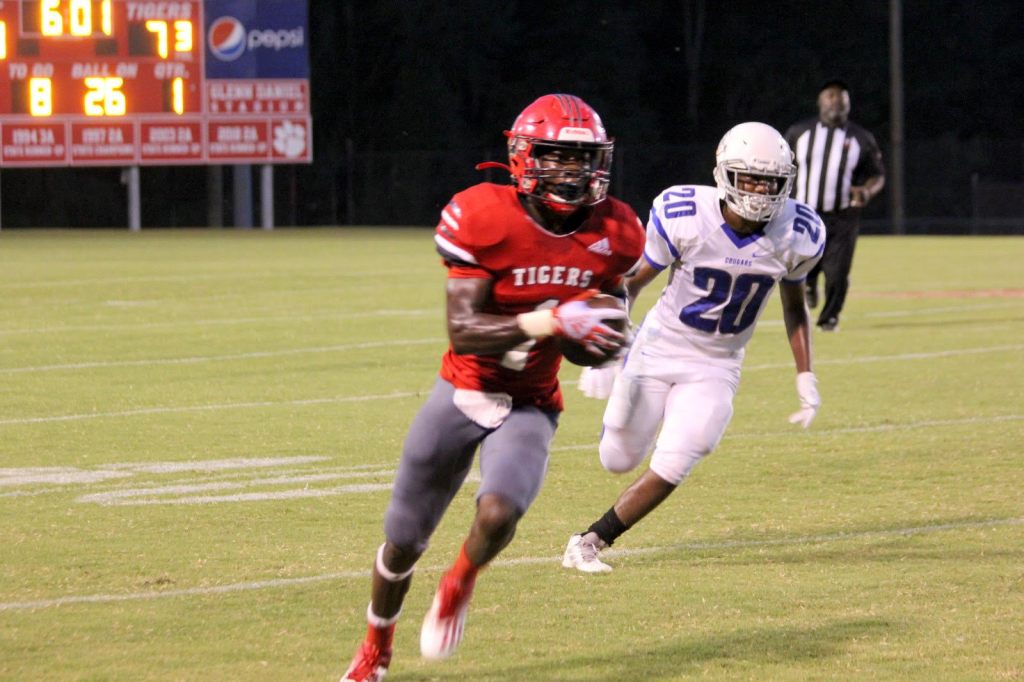 Head Coach Jason Rowell is proud of his players, but knows that there are always new things that need improvement.

“You never want to make the losses bigger than the wins,” Coach Rowell said. “Right now, we’re trying to improve offensively and learn how to throw the ball vertically down the field. The more we play, the better we’ll get.”

Luverne’s Johnny Smith kicked off the first quarter of the game and brought Central Coosa to the 19-yard line.

The Cougars gained about 3 yards, but were pushed back by a penalty for illegal procedure. The fourth down punt return brought the Tigers to Cougar territory.

Tiger John Taylor passed the ball to Desmond Mahone for a gain of 10 yards. KeeShaun Glanton was able to run the ball to the 6-yard line for a first and goal for the Tigers.

A fumble recovered by the Cougars broke the Tigers’ streak, but Mahone was able to intercept Central Coosa’s pass and bring the Tigers to the 26-yard line.

Tiger Nikki Taylor scored the first touchdown of the game.

The Cougars received the kick during the next play, but the Tiger defense was able to stop them from achieving any yardage gain.

Taylor was able to score another touchdown during the punt return, and then another after the Tigers recovered the ball after a fumble.

The Tigers were leading 20-0 with three minutes remaining in the first quarter.

The Tigers scored four more touchdowns before the end of the first half of the game.

Glanton, Taylor and Lakendrick Jordan carried the ball against the Cougar defense to bring the score to 48-0.

In the second half, the teams made the decision to continue running the clock.

A fumble by the Cougars was recovered by Luverne for a touchdown, bringing the score to 55-0.

The Cougars were able to score with four minutes remaining in the game.

The Tigers will face Millry at 7 p.m. at Glenn Daniel Stadium on Friday.

“Our goal each week is to get better,” Coach Rowell concluded. “It’s another chance to play against a quality team.”