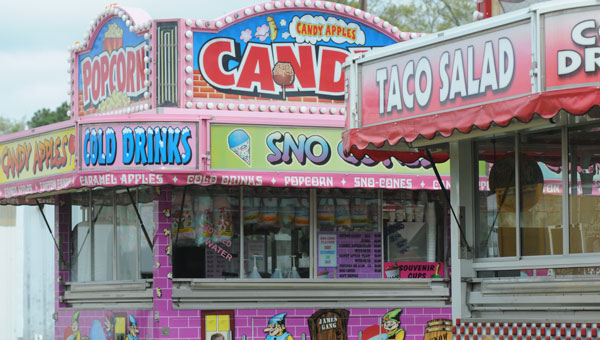 Visitors to the Butler County Fairgrounds can expect rides, food, games and other festivities throughout the week.

Like many things this year, COVID-19 has postponed one of fall’s favorite pastimes – The Butler County Fair.

On a typical, COVID-19 free year, the Kiwanis Club would be gearing up to have thousands pour into the fairground to get their fix of funnel cakes and cotton candy and take a ride on the Ferris wheel or tilt-a-whirl.

Typically, the fair runs in late September for families in Butler and the surrounding areas to enjoy. In addition to rides, there’s normally entertainment and a beauty pageant.

“We wouldn’t even consider having the fair this year until the governor lifted the statewide mask order. We can’t even pass the 50 percent capacity mark for the fairgrounds. Frankly, it’s scary out there right now, and we don’t feel like would be safe for the fair-goers,” Branum said.

Branum said the Kiwanis Club briefly thought about holding a smaller carnival in November of this year, but that the plans for that event fell through as well.

“It’s been a tough year for everyone. We wanted to throw a little event in Mid-November, just something that the kids can go to and enjoy.  However, plans with the company in St. Louis that owned the carnival never really went anywhere,” Branum said.

As of now, the Butler County Fair Association has no date to reschedule the fair anytime in the foreseeable future.