Georgiana defeated in opening game; this week’s game canceled due to COVID-19 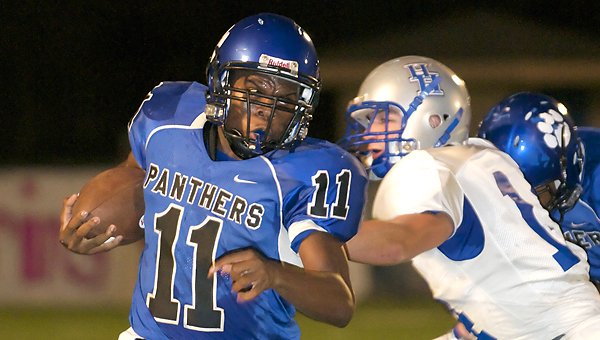 Georgiana senior Keon Binion rushed for 76 yards on 17 carries in the Panthers’ 30-18 loss to Highland Home.

The Georgiana Panthers have canceled Friday’s game against the New Brockton Gamecocks due to one of New Brockton’s players testing positive for COVID-19.

The Panthers kicked off the season on a rocky start against the Lanett Panthers, who defeated the team 0-47.

The game started with a kickoff by Georgiana but they were disappointed to watch Lanett score the game’s first touchdown.

Once Georgiana secured the ball, Lanett received an offsides penalty, resulting in a first and 10 for the Georgiana Panthers. During the fourth down, Georgiana punted the ball to Lanett but received a penalty for a false start and gave the Lanett Panthers a first down. Lanett carried the ball for another touchdown.

The ball was then punted to Georgiana but was recovered by Lanett, resulting in another Lanett touchdown.

During the next play, Georgiana received a penalty for a false start but came back with a pass, giving them a first down.

In the second quarter, Georgiana’s offense pushed Lanett past their 20-yard-line, but it was once again recovered by Lanett’s defense. A Lanett Panther was brought down by Ty Mobley, but Georgiana watched as a completed pass brought the Lanett team to 41 points.

Bryant Mitchell received the kickoff and brought Georgiana to the 30-yard-line. Mitchell ran for another first and ten for Georgiana, but an intended pass resulted in a turnover to Lanett. The first half of the game ended 0-47.

The Panthers were able to hold Lanett’s team the second half, starting with multiple yards attempted by Azenda Pennington.

The Panthers lost the game 0-47, but will have a chance to turn the season around in a regional game against the Pleasant Home Eagles in Andalusia at 7 p.m. on Friday, Sept. 4.