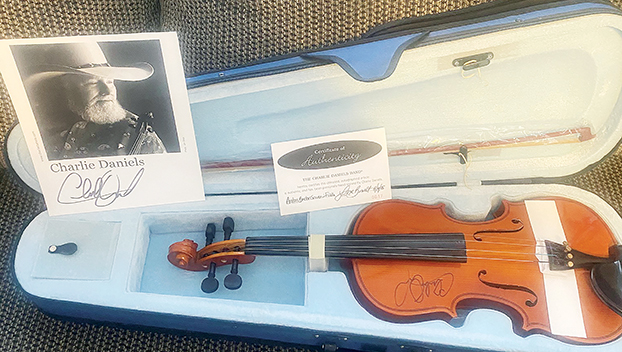 Country music fans across the world were saddened to hear about the death of country music legend Charlie Daniels earlier this month.

For one local family, the news had even greater personal implications.

Greg Luckie said the news “felt like a punch in the stomach” because of the kind gestures the country music Hall of Famer extended to his family in a time of need.

The story begins when Charlie Daniels visited Greenville’s Walmart for a CD signing event. The exact date according to an archived article in The Greenville Advocate was Nov. 5, 2004.

“We went to meet him and my son, who was 11 or 12 at the time, got some things signed,” Luckie recalled. “My son told Charlie that his granddad was a huge fan, but that he was sick and couldn’t come to the signing. So Charlie immediately said ‘Well, let me call him.’ I told him I’d need to call him first and warn him or he’d think it was a joke.”

Daniels went on to hold up the line to call and speak with both of Luckie’s parents, Billy and Joanne.

“He was on the phone with them for a while, having just a normal conversation,” Luckie explained. “He (Daniels) asked my dad what his favorite song of his was, said how sorry he was that he was sick and how great it was to meet his (Billy’s) grandson.”

If the story ended there, it would be simply a fun anecdote about a recently passed musician. Needless to say, it doesn’t.

Sometime after the signing, the family learned that Billy Luckie needed a heart transplant. They began efforts to raise money for the surgery.

Greg Luckie decided to take a look at Charlie Daniels’ charitable foundation and, after some searching, eventually spoke with the man himself again.

“He remembered us from the signing at Walmart,” Luckie said. “I asked him if he had something we could sell at an auction for my dad’s heart transplant. He said yes, to not even worry about it, and I didn’t think much about it after that.”

Two weeks later, however, a signed fiddle arrived on the family’s doorstep along with a certificate of authenticity and a signed picture.

Sadly, Billy passed away before the auction could be held.

“My son (Wayne), who is 28 now, still has the fiddle,” Luckie concluded. “(Daniels) also sent us a letter, saying how sorry he was about Dad dying, but sadly we lost that letter in a house fire in 2014.”

So, while many remember Daniels for country hits such as “The Devil Went Down to Georgia” or his impressive skill at multiple instruments, the Luckie family will also remember him for his kindness and generosity in their time of need.

Local girl donates her hair to Wigs for Kids