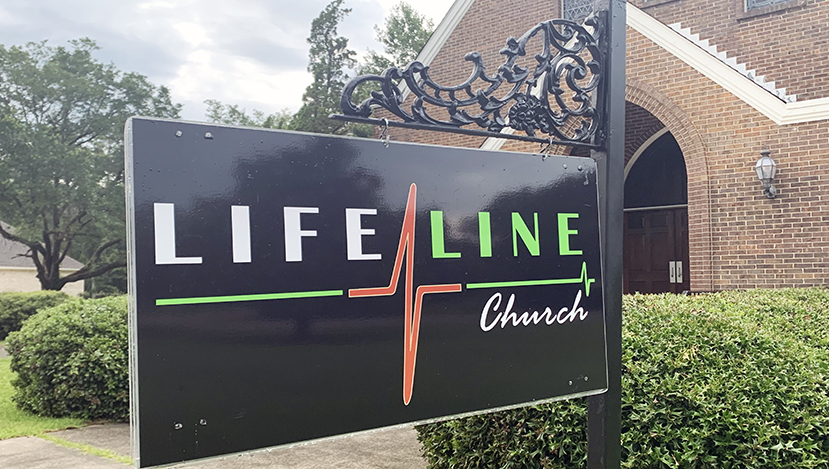 Seven years ago, Eric Jackson was a full-time pastor in Elmore County. Then he felt a call from above to begin a new endeavor.

“God laid it on my heart to plant a new church somewhere,” he said.

Working with the North American Mission Board, a number of possible locations in several states were considered.

“Greenville was the only place out of six where the doors stayed open the entire time, so we came here,” Jackson, who is the senior pastor at Lifeline Church in Greenville explained.

Lifeline began with just a handful of people meeting for Bible study  in the Jackson family’s living room.

Seven years and several meeting places later, this non-denominational church has a growing membership and claims ownership of two buildings, including its new location in the former Woodland Heights Methodist Church on Wood Valley Road.

And Lifeline is doing it all debt-free.

“Honestly, nothing like this could have happened if it had been planned by me,” Jackson said. “This was God’s plan. From the beginning, we were very intentional in what we were doing and why. We knew from the start we did not want to carry a debt; that we would trust in the Lord to provide a way for us.”

When the fledgling congregation outgrew the pastor’s home, the local YMCA was offered as a meeting place free of charge. After roughly a year, Jackson began to look for a new location offering both space and climate control and contacted Michael Nimmer of The Edge 8 Theater in Greenville.

“Michael was able to offer us a very affordable option for using the theater that included coverage of the utilities and all our refreshments,” Jackson explained. “Literally, all we had to do was bring our own cups.”

Lifeline remained at The Edge for two years. When ownership of the theater changed hands, it signaled time for another move for his congregation, the pastor said.

And that’s when Becky Morris came into the picture.

“We were given Miss Becky’s name as someone who could help us,” Jackson said. “We invited her to worship with us and she came one Sunday. She told me afterwards she loved our vision and what we were doing. She and Miss Betty Couey were the caretakers of the old First Christian Church building on Fort Dale Road. They worked out the details and offered us the same rental fee we were paying at the theater, but we’d be responsible for the utilities and other expenses. I brought all this before our folks and they all supported this move.”

In its new home in the First Christian Church building, Lifeline continued its “positive, slow, but steady” growth, Jackson said, including branching out into international ministry with Indian students from AUM.

Then one day, Morris and Couey approached the pastor.

“They said, ‘We need to talk.’ And I was wondering, OK, just what had I done?” Jackson said with a laugh.

As it turned out, the two trustees of First Christian wanted to give Lifeline their building and all its assets.

“I told them to pray long and hard about this,” Jackson said. “There were things we wanted to do to that structure to make it better suited to meet our needs. If they were sentimentally attached to it, they might not want to do this. Well, they came back later and said they had prayed and were sure this is what God wanted them to do.”

After assistance from Richard Branum of Butler Land and Title, a ceremonial changing of hands was held at the church.

There were some issues to resolve at the Fort Dale Road facility, including the need to bring the 1957 structure up to code.

It was also determined the facility and the land around it would not be able to accommodate a congregation of more than 70 to 75 people.

“We were already close to that number pre-COVID, and we intend to grow a lot more,” the pastor explained. “So we knew we’d have to sell and move again.”

The church began the process of looking for a new home. Then Jackson’s phone rang.

“It was the people from Zaxby’s saying they wanted to buy our building,” he explained. “They paid us a very generous amount, allowing us to move ahead and purchase the former Cahaba Interiors building for our new church home.”

Lifeline had just started having plans drawn up to convert the old furniture building, when yet another opportunity presented itself.

“We had the chance to purchase the former Woodland Heights Methodist Church, and we had the money in the bank to do it,” Jackson said. “This was a turnkey property with a sanctuary that could hold well over 200 people. We purchased it and got moved in. Lifeline has a new home with room to grow, debt-free. This is truly exciting for us all. God’s been with us every step of the way.”

The Cahaba Interiors building is available for lease or purchase, and Jackson says monies made through that property will be invested in the Wood Valley Road property.

Currently, Lifeline is holding online services at 10 a.m. each Sunday with Robbie and Rosie Till leading worship on Thursday nights at 6 p.m. Associate pastor Bruce Coker and wife, Lisa, of Mt. Willing in Lowndes County are wrapping up a Wednesday night Bible study this week, with a new study set to begin in two weeks.

“We are looking into holding services following social distancing guidelines in the future and our motorcycle group, the Lifeline Riders, just enjoyed a socially-distanced ride last weekend,” Jackson said. “We invite folks to like and follow our Facebook page, Lifeline Church Greenville, and be sure to turn on your notifications so you can keep up with everything that’s going on.”

Lifeline will stay true to its mission, Jackson added.

“We always keep our vision in front of us, a vision of reconnecting those who have become disconnected, uniting them with Christ and His people,” he concluded.