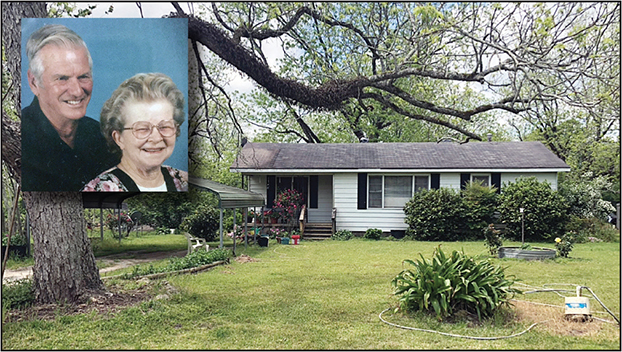 In south Alabama, there’s a small community most have never heard of called Shreve. It’s a suburb, if you want to call it that, of the small and shrinking Town of McKenzie in south Butler County. It has no stores, no post offices, no red lights and only a few stop signs. What you will find there is an old white house with black shutters just yards from the area where Butler, Conecuh and Covington counties meet.

You can’t see this old white house from the road, but it’s there, hidden behind some bushes, tall pecan trees, a row of knockout roses and some railroad tracks. This old white house is surrounded by a partially paved road that turns into a dirt road, two very old barns packed with new and old farm equipment, a large greenhouse, an old rusty truck, a few fruit trees, some cows grazing and a simple mailbox with the word “Wingard” in stickers written on it. Inside this old house, you’ll find an old wooden floor, old furniture, a few family pictures, an A/C window unit, a TV that barely picks up any channels and three bedrooms with simple old beds still standing. While the house has certainly seen better days, what it’s also missing are it’s caretakers. Carl and Olean Wingard lived in this old house for decades raising their seven children. It’s been home to countless breakfasts, lunches and dinners, family holiday celebrations or just a pop-in visit from a grandchild like me.

What’s different now is this old white house is eerily silent. My grandmother, Olean, passed away in 2015 after surviving a stroke and living her final months in a nursing home. This weekend, my 92-year-old, hard-working grandfather, Carl, passed away as well. His death marked the end of his suffering and longing to be back with my grandmother in Heaven.

While we will miss my grandfather greatly, I’ve been spending some time thinking back to a few of my favorite memories of them together.

If you are Wingard you have farming in your DNA. It’s just there. When I was growing up, when school let out for summer, that meant me, my sister and cousins instantly became farm labor for my grandparents produce farm. For decades, they grew tobacco, then they operated a produce stand from an old tin roofed barn in their backyard. People from all over the country, including many beach travelers, would pull off Hwy. 55, turn in that half paved road around their house and come buy fresh tomatoes, watermelons, peas, beans, peppers, corn, okra and much more. It was the job of me and my cousins to get up around 6 a.m. all summer and help pick the produce — mostly tomatoes. We learned a lot during those three months each year, including the benefits of hard work and that my grandparents expected less talking and playing, and more bending your back and walking on your knees to find those tomatoes at the bottom of the vines.

After the harvesting was over each day, I would help run the produce stand with my cousins. What I looked forward to each day was the lunch break. My grandmother would cook a homemade meal every day after working in the tomato patch with us. Her staple was peas, beans, and corn bread. The corn bread was not just any cornbread, it had to be fried patties. It was my grandfather’s favorite as long as he had some cold sweet iced tea and syrup to dip it in. As we ate each day — right around 12:30 p.m. — my grandmother would remark about how crazy the people on “Days of Our Lives” were being and my grandfather would say that was his cue to go take a quick nap. When his nap was over, he was back in the field — most of the time doing some project with my dad or uncle. As he left, the old wooden screen door on the back of the house would make a loud smashing sound as it closed.

If I had to describe my grandfather for those who didn’t know him, I would describe him as tall, deep voiced, hard-working and, for decades, a cigarette smoker. Most of the time, he wore the same thing every day — blue jeans, a blue jean button up shirt, dirty brown work boots and a hat. When he wasn’t working, you’d find him sitting in his truck with the door open, in his sitting chair in his den reading one of the local newspapers or watching a farming show on TV. He also loved to snack on graham crackers.

When my grandmother had her stroke, my grandfather drove to the nursing home every day sometimes twice a day and just sat with her. She couldn’t talk, but he didn’t care. He did that for months and he did it when other family members encouraged him to stay home and rest. He would not be denied. After she passed away, he was not the same person. The house they lived in was also not the same either. Each time I visited, it felt empty, quiet, almost like it too was mourning my grandmother not being there. Despite that, my grandfather carried on for years without her, working to help my dad on the farm when he felt like it or doing his own thing. My dad, aunts and uncles and cousins all have took turns feeding and checking on him the last few years when his health began to get worse. Several months ago, I visited him before he ended up in a nursing home (during a pandemic.) He told me, “I don’t know why I’m still here.” I told him it’s because we still needed him. He chuckled and said, “I guess” and then changed the topic.

During this time, he told me a story about briefly joining the Air Force Reserves, going all the way to California and then coming back home to work on his farm. He told me a story about how the family had a house fire when my aunts and uncles were young and how it freaked out my dad as a kid, which is how I probably learned from him to check and double check anything that can burn. He was tired. I could tell. He was on oxygen and just looked worn out. When I left that day, I told him I loved him and paused in the kitchen and looked at him in his chair before I walked out. It’s my final memory of him.

As I reflected on my grandfather, I recalled this Paul Harvey’s tribute and I thought it was fitting. It’s called “So God Made A Farmer” www.youtube.com/watch?v=7UBj4Rbq3ZI

I know most people think their grandparents are the best, but I truly feel like I was blessed with the best. Three of my four are now gone to Heaven. They all played a big role in who I am today and I’ll carry their memories and lessons with me forever.