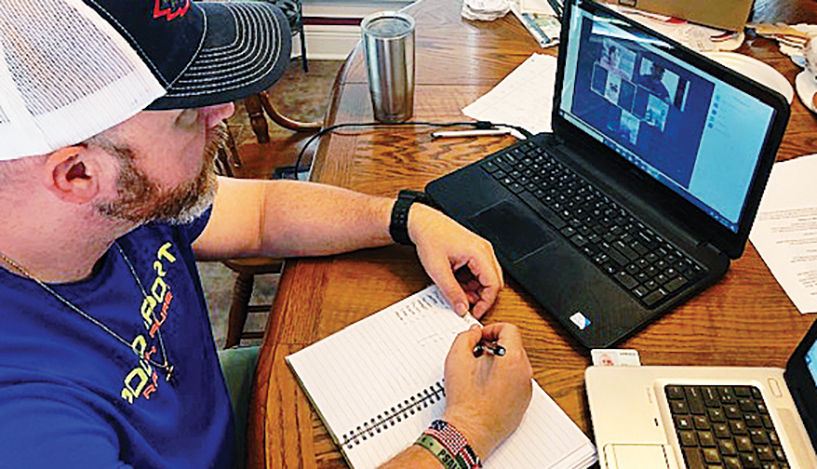 The continuing pandemic has forced many traditional summer activities to go on hiatus.

However, the local Boy Scouts troop did not let COVID-19 stop their plans for a fun and educational summer camp experience.

Greg Kendrick, scoutmaster for Troop 520, and several volunteers joined forces last week to bring a virtual camp to nine of its members.

“Normally, every year our state council hosts camps in Prattville for three consecutive weeks in the earlier part of summer. Well, due to the pandemic, they decided to push it to one week in late August, and later, to cancel altogether. Even if it had been held in August, none of our boys would have been able to attend due to school,” Kendrick explained. “So, I talked with our leaders and a couple of our Eagle Scouts and suggested we consider a virtual camp-out this summer. They were all on board for it.”

Kendrick and his volunteers each chose which of the nine badges they would teach and a schedule was created.

“We tried to have a mix of good outside activities and some things that would just be fun. I think they all chose the game design class,” Kendrick said.

While the classes ended each afternoon, the virtual camping experience did not. Each of the boys set up a tent in their yards and camped out every night. During a typical week at scout camp, the campers would be served all their meals in the camp’s dining hall, except for one night at their campsite. Not so with last week’s virtual camp.

Each camper was required to prepare three meals a day “and with no help from Mom,” Kendrick stressed.

“The meals all had to be prepared by the campers outdoors using a grill or camp stove. The only thing they were allowed to use in the kitchen was the sink for sanitation purposes. No kitchen appliances, no automatic dishwasher allowed.”

The campers were required to submit their menu plans in advance for approval. Not surprisingly, the boys chose a lot of heart stick-to-your-ribs fare including burgers, bacon and eggs and biscuits and gravy.

And that is a part of the virtual camp that Kendrick sees as beneficial to all of the Scouts.

“A lot of these kids, having been at home for months now, have been spending some time in the kitchen preparing food instead of just chowing down. This gave our campers the chance to learn and to expand upon their knowledge. That’s great for Scouting activities and for their life skills in general,” Kendrick said.

“We have a great group of boys and we were glad to be able to bring a unique camping experience to them from their own backyards,” Kendrick said.