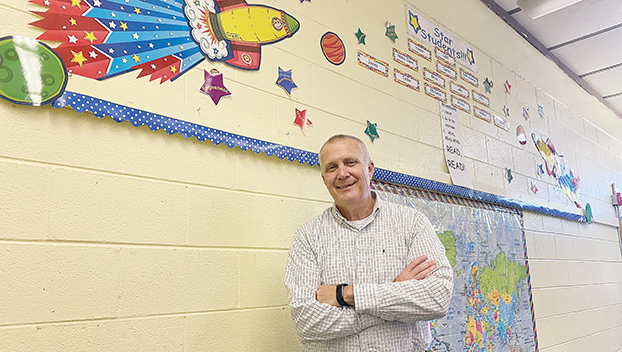 Only days after being named the new head of school at Fort Dale Academy, David Sikes is already settling into his new role, but the seasoned leader is no stranger to the school or to Greenville.

Sikes, who was serving as Pike Road High School’s first principal, was hired this week by the Fort Dale Board of Trustees. He replaces Kurt Page, who was headmaster during the 2019-20 school year. Page replaced longtime headmaster David Brantley.

Sikes has decades of administrative experience, including stints in the Camellia City. From 1995-97, he was the Greenville High School head softball coach and an assistant football coach. He taught physical education courses at Greenville Middle School and served as the counselor for W.O. Parmer Elementary School during the 1996-97 school year.

“It’s very exciting,” Sikes said. “It’s a job that I’ve thought about for a long time. The timing was good for me and I think good for them, and it’s worked out really well for us.”

The move is also special to Sikes because his wife, Jami Barlow Sikes, is a graduate of FDA.

“She’s in the Hall of Fame here for basketball,” he said. “She was an Achiever Award winner and my mom actually taught here. I’ve got a lot of connections to the school. It’s like a homecoming.”

Board Chairman Howard Meadows said the board is excited to have Sikes on board.

“Time and again throughout the interview process and in speaking with former colleagues, the board confirmed Mr. Sikes’ leadership skills and ability to properly handle a myriad of problems,” he said. “Mr. Sikes also has several connections to the City of Greenville and Fort Dale Academy. The board believes that his knowledge and understanding of the school and the community will serve him well in leading us into the future.”

Sikes said he began his career as a college football coach.

“I coached at Auburn with coach (Pat) Dye, then Jacksonville State, where I had a lot of people from Greenville on the team,” he continued. “We were the 1992 champions of Division II. I left there and became a high school football coach. I was at Greenville 95, 96 and 97. I was softball coach and the offensive coordinator for Gene Allen for a couple of years. I went to Elba as head coach and I started administration after that in Montgomery at Lanier, Floyd Middle Magnet and Lee High School.”

Sikes said he and other administrators have many things to deal with as they prepare for the coming school year, including COVID-19.

“I’m anxious to see what the governor has to say,” he said. “It is something we will have to address once the state superintendent and governor decide what their guidelines will be.”

The new athletic facilities at Fort Dale also make it an exciting time for Sikes as he takes the helm.

“I just had a chance to tour it,” he said. “We went down and saw the new weight room and practice gym. It’s going to be really great.”

Sikes will also be busy in the near future meeting with parents and faculty.

“We’re going to get their input as to where we go from here and what direction and what our vision is,” Sikes said. “We want to get a feeling of what their needs are. I’ll probably meet with the faculty first — we’re getting some times set to meet with them individually. We will work our way to the Fort Dale family after we meet with the teachers.”

Sikes said the experienced teachers and staff are important to the school.

“It’s a high rigor school,” he said “It’s a close-knit faculty. We just have to make sure everybody is paddling the boat in the same direction and get some idea what our group vision is and what we want our students to get out of it. We want to do everything we can to set everybody up for success – students and faculty.”

Meadows believes Sikes is the right person for the job.

“Mr. Sikes is excited to get to work and tackle the many challenges and opportunities associated with leading a school,” Meadows said. “His passion for educating children and helping them achieve their maximum potential was evident to us and we look forward to him bringing this Commitment to Excellence to Fort Dale Academy. The Board has enjoyed getting to know Mr. Sikes throughout the interview process.”

Sikes said he is looking forward to getting settled in.

“I’m glad to be here — ecstatic to be here,” he concluded. “It’s always had a good reputation as a good school and it’s been a thought of mine to be here and the timing just worked out perfectly — I think for everybody. We want to come in and make sure we take care of our students, take care of our faculty and staff and give everybody a chance to be successful.”