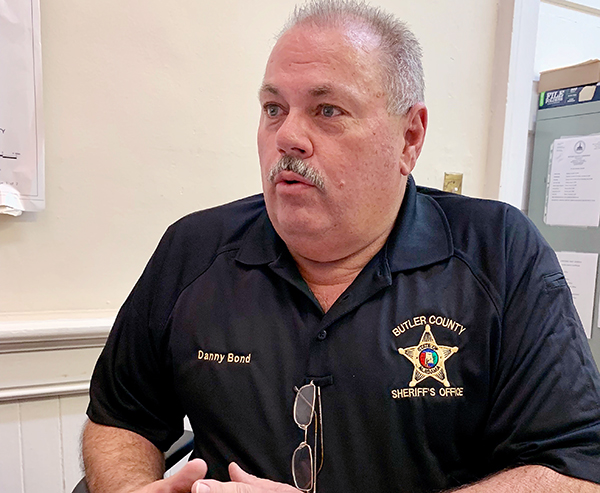 Thursday afternoon from his office inside the Butler County Courthouse. | Photo by Mark Rogers

When the Greenville Police Department responded to a call of a shooting last Friday night that led to a homicide investigation, it marked the fifth shooting incident in 10 days in Butler County. The Butler County Sheriff’s Office had investigated four shootings in seven days that left one dead, three people in jail and two hospitalized.

On June 9, the Butler County Sheriff’s Office investigated the shooting death of Martha Lawson, 59, at her home on Narrow Lane. Her husband, Ricky Lawson, 59, was charged in the incident.

The first shooting incident occurred at the Chapman Post Office on June 3, where deputies responded to a report of a vehicle being shot up.

“No one was hurt,” Butler County Sheriff Danny Bond said. “The case is still under investigation and because it was at a Post Office, we’ve notified the U.S. Postal Inspector’s Office.

Then over the weekend of
June 5, two additional shooting
incidents occurred.

“On June 5, we had a shooting where the offenders were apparently shooting at each other and both of them got hit,” Bond said Monday. “They are both still hospitalized and we will arrest them when they get out.”

Bond said the incident took place on Gravel Hill Road and that the investigation was still ongoing. He did not release the names of the subjects pending their arrests.

The other shooting incident took place on Mobile Highway and left a man injured and a woman grazed by a bullet, according to Bond.

“The second shooting was on June 6,” he said. “Two gentlemen got into an altercation and one subject got shot in both arms. He (the shooter) left the scene and got into it with his girlfriend and he actually fired off a round at her — it struck her across the temple.”

Bond said the first shooting took place on Mobile Highway and the second part of the incident took place on Poplar Road off Manningham Road. Deputies arrested Hunter Lane Hall, 24, of Greenville and charged him with attempted murder and domestic violence.

Bond said deputies searched overnight into Sunday for Hall and located him late on June 7.

“We found him about midnight or so,” Bond said. “We took him into custody there. We got the response team from Greenville out there. It wasn’t a standoff or hostage situation, but it could have very well went that way in a hurry.”

There were no injuries in the apprehension.

“I want to say thanks to the Greenville Police Department for the assistance they provided in these cases,” Bond concluded.