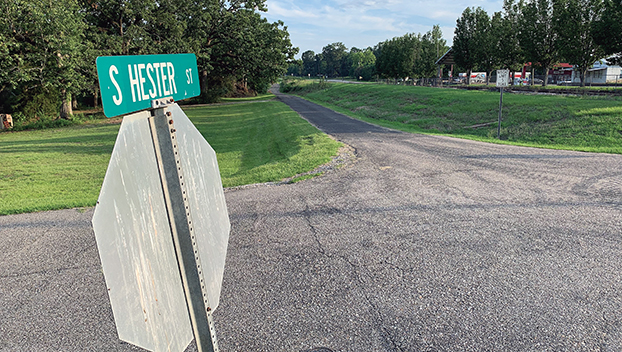 South Hester Street in McKenzie is one of several roads that are in dire need of repairs. | Photo by Mark Rogers

The Town of McKenzie hopes to find money to continue paving projects and make much-needed infrastructure improvements with the help of a grant.

McKenzie officials hosted a Public Hearing Monday night to discuss the submission of an application for fiscal year 2020 for the Community Development Block Grant (CDBG) program.

Cara Stallman of Grants Management, LLC. of Fairhope will be preparing the submission and discussed items during the brief meeting.

“I’ve done grant work for McKenzie for 10 or 12 years now,” Stallman said in the meeting. “We just finished up a grant that included some paving on roads here last year and now we’re going to go for another one. This grant is a competitive one — it’s a Community Development Block Grant. It is money that comes from Housing and Urban Development (HUD) and it has to go to low income, minority populations.”

Stallman passed around a map that shows paving work on South Garland Road and South Hester Street as well as water service tubing and meter replacement on a portion of Wise Road and Davison Street.

Mayor Lester Odom asked if the paving projects had to be performed in specific areas for the grants.

“It kind of does,” Stallman said. “It makes more sense if you can tell a story – if everything touches. There are several options you can do. This is competitive money. You’re competing with every other town in the state right now.”

Odom talked about other areas he would like to see projects implemented.

“One is on Crum Street,” he said. “Also, the rest of Sellers Street, which is near the schoolhouse.”

Several other streets were discussed and Odom said the grants would be more likely to be approved in areas where there were multiples homes or a larger area impacted.

“It’s really competitive money in your bracket,” Stallman said. “You’re competing with every town that has less than 3,000 people in the state.”

Odom said he would like to see Crum Street get attention.

Stallman said it took several years to get the last grant.

“It took four years,” she said. “We applied four times in a row. That’s not going to happen this year – we’re going to get it in the first or second year this time.”

Previously, McKenzie lost out on some of the funding because its water rates were deemed too low.

“They want you to raise your rates because they want you to be able to be independent and be able to support your system,” Stallman said. “We got penalized every year because of the rates. It’s a very quantitative process that includes the number of households, poverty, income and all those things.”

The process will be put in motion soon and the Town of McKenzie would likely know by fall if they got the grant and projects would begin next year.