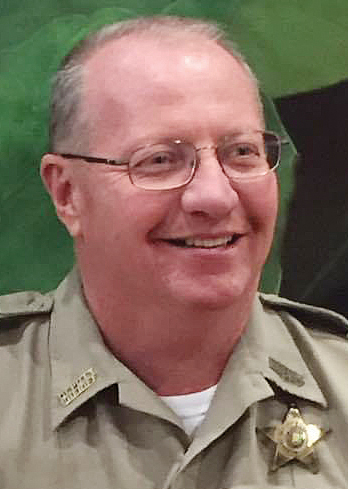 A veteran law enforcement officer with a background in firefighting, EMS and amateur radio is set to take the helm of the Butler County Emergency Management Agency.

Michael Vigor will begin his term as EMA director June 1 after being hired by the Butler County Commission last Tuesday. The Commission had been receiving applications for the position since the resignation of Kris Ware early this year. The board had extensive discussions on what Commissioner Frank Hickman said was the “best group of applicants we’ve seen.” Commissioner Darrell Sanders told fellow commissioners “we had several good candidates,” and Commissioner Joey Peavy said it was a “very hard decision.”

Vigor, who is currently with the Covington County Sheriff’s Office, said he’s excited to take the position.

“I started as a volunteer fireman at around 17 years old,” Vigor said. “I was at the Semmes Volunteer Fire Department and that led me to EMT school. I became an EMT in 1986 and worked on ambulances down and around Mobile full-time and part-time for years. In 2006, I moved up here and worked for the Covington County Sheriff’s Office. I’ve been in several different capacities throughout the years. I started out in the jail and then they had a slot at the courthouse. I was over security at the courthouse from 2007-2009 and then in 2012, I went into the School Resource Division, and I’ve been there since then.”

Commission members had stressed that the person in that position needs to work closely with the area fire departments.

“I told Mr. Sanders that’s how I got my start,” Vigor said. “I also finished up my paramedic degree in 2011. I’ve been in fire, EMS and law enforcement. I’ll be starting June 1 in Butler County.”

Vigor said he’s always wanted a role that could combine his various skills and interests.

“I told the Commission when I interviewed that I feel like I’ve been training for this job for my whole life,” Vigor said. “I don’t know of another occupation where I can take law enforcement, fire, EMS and ham radio and use all of those skills or abilities in a job. I’m thrilled to death to be selected and blessed. I’m really happy they put the confidence in me to lead the EMA for the citizens of Butler County.”

As Vigor steps into the role, emergency management across the state is dealing with the COVID-19 pandemic, tornadoes and the start of hurricane season.

“I’ve got a lot of good friendships over the years and I know the EMA director in Covington County (Susan Harris), and she’s offered to help in any way she can,” Vigor said. “There are several other EMA directors that have reached out — I’m getting offers to come show me the ropes.”

“They seem like a great bunch of gentlemen to work with,” he said. “I’ve been working with Diane Kilpatrick (county administrator) the last week or so and she seems like a really great person to work with.”

Vigor said he would be living in the McKenzie area soon as he is in the process of building a home on family land there.

“I’m looking forward to serving the people of Butler County,” he concluded.