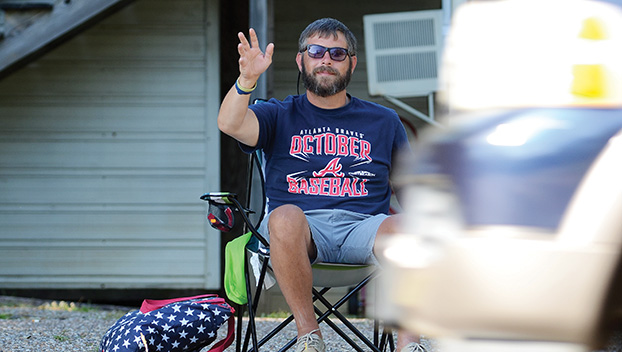 It is said that small gestures make a big impression. That is the plan for one Greenville native.

During a time of uncertainty, Thomas Jonathan (T.J.) Garrard, a 37-year-old disabled United States Army veteran, has maintained a positive attitude during the COVID-19 pandemic by passing along one small gesture to every passing motorist: a simple wave of the hand.

Garrard said that the idea began seven weeks ago when social distancing was encouraged following the rise of positive coronavirus cases both statewide and throughout Butler County.

“Humans are social beings,” he explained. “We need social interaction. It’s who we are. Everything I did to socialize had suddenly closed. Baseball games, restaurants and even churches. Doors closed. I had a choice, either lock myself inside or find a way to still be social. Smiling and waving is what I came up with. It’s a way to be social while social distancing. It’s a way to tell my city that I still exist, and I see that they do too, and that we are still friends.”

The Greenville Academy graduate’s small idea has
proven big for many passersby as he waves to them from a chair next to Fort Dale Road near W.O. Parmer Elementary.

“It always makes me feel good when I drive by,” Greenville businessman Benjamin Faulkenberry said. “A simple wave can really change someone’s day. It has proven to be a boost. I have a long day at work and boom, someone waves at me and it brings a smile out. Small things go a long way.”

Longtime Greenville attorney Brandon Sellers, who also serves on the Butler County School System’s board, has known Garrard for many years and was proud to witness his optimism.

“I drive by his house every day at least once and I started noticing that he was sitting out front waving to people,” Sellers explained. “I stopped and asked him what he was doing and he said he was just waving at people to try to brighten their day. I think he is doing a wonderful job, and when I ride by I always honk and wave back to him. It does make me feel a little bit more cheerful to see him each day, and with all of the uncertainty in our lives right now, I believe we all need someone who will brighten our days.”

Garrard, a bachelor with no children, received an honorable medical retirement from the Army in 2016 after 10 years of service including a combat tour in Iraq. He worked in transportation and field artillery while serving his country.

Two years ago next month, Garrard’s father, Bob, who was pastor of Friendship Baptist Church in Pineapple, passed away. His sister, Abby Garrard Walker, who was a special education teacher at Greenville Middle School also passed away unexpectedly from a heart attack last year. She was 39 years old.

Garrard, his mother, Bette, as well as his brother, Ben, have seen their fair share of heartache over the last few years. So when the avid Atlanta Braves baseball fan learned of business closures and self-distancing, he thought of the best way he could cope with the isolation as well as help others.

“Everyone has been so friendly,” Garrard said of passing motorist. “Everyone waves unless they just don’t see me when I sit in the shade. I have a self-competition between days to see how many honks I get.”

Similar to his all-time favorite baseball player, Cal Ripken Jr., nicknamed The Iron Man, the most honks Garrard has received in a single day has been 94, the same year that the star Orioles third baseman played in his 2,000th consecutive game. A 112 games into the season, however, it was canceled due to the Major League Baseball strike. Much like in 1994, the 2020 MLB season has been postponed due to COVID-19 with hopes of throwing the season’s first pitch in early July.

Garrard has also seen his fair share of unusual and lavish vehicles passing by his home.

“There is this really long, light blue Cadillac from the 70s and a very friendly man that drives it,” he said. “The nicest is a Tesla.”

Some responses to Garrard’s simple wave have stuck out as well.

“Girls jumping out of the sun roof to yell is my most unusual response,” he said.

Now that Gov. Kay Ivey has started the process of slowly reopening businesses throughout the state, Garrard plans to continue his friendly waving, only scaled down some.

“I plan to wave every other day now and start in-person support of business,” he said.

Garrard’s plan is to wave from 1 p.m. until 6 p.m. on Tuesdays, Thursdays and Saturdays, while visiting local businesses and restaurants on his “off days” to social distance with business owners and friends once again. His first stops: “Wintzell’s for a drink and bacon wrapped shrimp, then the Alabama Grill for a ribeye, rare.”

As for the COVID-19 pandemic, Garrard respects the virus, but doesn’t allow it to cause him anxiety. He has obeyed the rules set in place by the state, county and city, however, falls back on what he learned serving his country.

“I respect other’s fear of it,” he concluded. “I believe it is a serious threat to some people. It may even be a threat to loved ones of mine. I personally, choose not to live in fear. I believe in the Constitution and liberty and freedom. Let people choose for themselves what is best for their own health and safety. That’s just my opinion and I completely respect everyone who feels differently.”