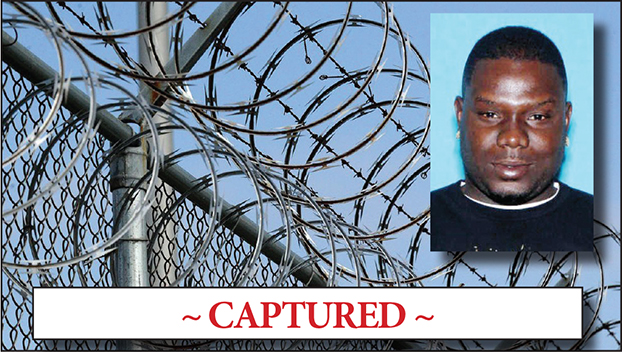 An inmate who escaped the custody of the Butler County Correctional Facility last week is back behind bars.

Jerome Sharp, 32, was taken into custody last Wednesday after more than two days in the outside world, according to Butler County Sheriff Danny Bond.

“This afternoon, inmate Sharp contacted the sheriff’s office wanting to speak with the sheriff,” Bond said. “After a brief conversation, he relayed that he wanted to turn himself in to me.”

Bond said after the first call, Sharp touched base again.

“After about an hour, inmate Sharp called with an address in Montgomery, so myself and Deputy (David) Scruggs went to the address, along with U.S. Marshals where inmate Sharp was taken into custody and transported to the Department of Corrections.”

Last week, Bond shared information about the May 4 escape as the BCSO and other law enforcement agencies searched for Sharp.

“He went out and climbed the fence on the back by what I call the loading dock where they bring in the groceries and everything,” Bond said. “We think a vehicle picked him up. He has ties to folks in the Montgomery area.”

Bond also said last Tuesday that the escape led to changes at the correctional facility.

“During the investigation, we determined that there had to be a personnel change and that occurred yesterday,” he said. “Being the sheriff, the responsibility lies with me and it is my responsibility to bring him to justice. Having said that, we are doing the best we can to make sure Butler County is safe.”

Sharp was jailed in Butler County on third-degree domestic violence, menacing; ex-felon in possession of a firearm and third-degree domestic violence, criminal mischief. Because of his arrest in Butler County, Sharp’s Alabama state probation status was revoked, making him an inmate of the Alabama Department of Corrections and the Butler County Sheriff’s Office. The U.S. Marshal’ Fugitive Task Force advised that Sharp was serving a 20-year sentence for a 2011 first-degree robbery conviction out of Montgomery County.

Bond added that a lot of hard work went in to apprehending Sharp.

“I want to thank my staff and the U.S. Marshals for their work bringing inmate Sharp into custody,” Bond concluded.

Drive-up COVID-19 testing in Butler County on May 15

A drive-up COVID-19 testing clinic will be offered at the Butler County Health Department on Friday, May 15, from 10... read more