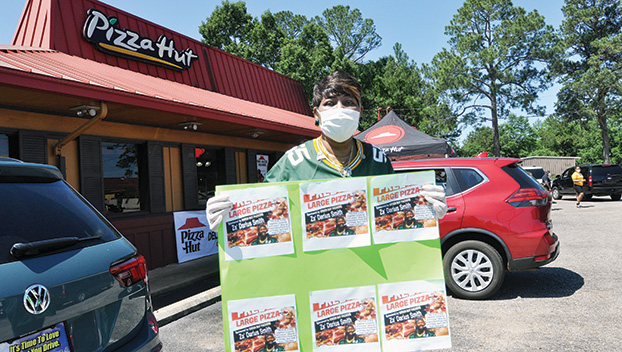 The lines on Fort Dale Road last Friday near Pizza Hut made Sharon Smith smile under her protective mask.

Smith, the mother of NFL player Za’Darius Smith, was helping distribute hundreds of pizzas to area residents courtesy of her son, a Greenville High graduate and current member of the Green Bay Packers.

Za’Darius Smith said on Facebook recently that he wanted to give back to the community he grew up in during the tough times caused by the COVID-19 pandemic.

“I wanted to do something special for the kids in the city, so I’ve partnered with some local restaurants,” he said. “On Wednesdays, I’ll drop a time and location for y’all to bring the kids on Fridays to pick something up to eat. There will be specific instructions for each location on Wednesdays. Stay tuned … more to come.”

“A couple of weeks ago, we were on the phone talking,” Sharon Smith said. “I told him that the kids were going to be out of school for the rest of the year. I told him how some people were giving them snack bags and lunches and he said, ‘Well, mom I need to get something down there don’t I?” I said, ‘Yeah, you can. Let’s pray about it and see what we can come up with.’”

A few days later when Za’Darius called his mother, she said one of his former teachers Stefani Grayson was involved with handing out lunch bags to students.

“I told him to get with her and see what she could come up with,” Sharon Smith said out front of the pizza restaurant last Friday. “She got the ball rolling. We decided we were going to do Pizza Hut this week.”

NPC International, the owner of the Greenville Pizza Hut, partnered with Za’Darius Smith, the Packers’ outside linebacker to help provide the pizzas.

“It was something truly fantastic,” NPC International District Manager Sam Autrey said. “It was so much fun. Not many can say they took part in something like this in their career, and I’m thankful I can.”

Sharon Smith said Za’Darius plans to give something away each week for a month.

Sharon Smith said Za’Darius will make regular announcements on Facebook with the times and details.

“We just wanted to show Greenville, Alabama that we care about them during this pandemic time,” Sharon Smith concluded. “The turnout is amazing and I’m thankful to the police for helping out. I called Chief (Justin) Lovvorn and told him I felt like we were going to get a traffic jam. We sure got one. I thank everyone for coming out to support us.”