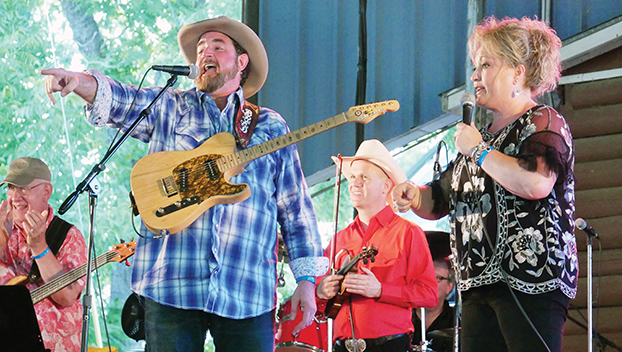 Brad Magness and his band give a shout out to supporters in the audience during Hank Fest 2019. | File Photo

The annual Hank Williams Festival in Georgiana has been canceled for this year due to the COVID-19 pandemic.

Organizers announced last week that the 41st annual event, which was to have been held June 5-6 at Hank Williams Music Park was canceled.

“It’s canceled altogether,” spokesman Gerald Hodges said. “Apparently they were able to get out of the contracts with Bill Anderson and Gene Watson. They felt like — at least my opinion of it was — that if it were held, we would have people show up, everybody would be wearing facemasks. Most of our fans who come are older people. We knew that if the entertainers came, they would not be mixing and mingling with any of the audience. They would get off the bus, go on stage and get right back on the bus. It was just a lot of things and some things were unclear — we just felt that it was better to cancel it altogether.”

Organizers are now focusing on next year.

“Hopefully, we can do even better,” Hodges said. “We probably had the best lineup we’ve ever had this year. We’ve never really had two big entertainers like Bill Anderson and Gene Watson. We thought this would be a great year with the biggest lineup of entertainers. Not only these two great country legends, but also, we had Hank’s grandson, Sam, coming and Scott Haggard. We have a young man that comes over from Sweden, Edward Johansson, and I talk with him frequently. He’s made a lot of friends here in the states. He plays in Mobile at some of the clubs.”

Also of note is that the Hank Williams Museum in Georgiana remains closed due to the pandemic. The museum is housed in a home where Hank Williams lived and dates back to 1903. It is on the Alabama Heritage and Landmarks list.