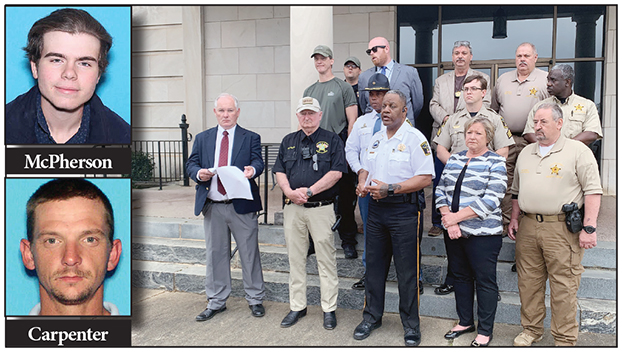 Two Greenville men wanted in connection with a pair of bank robberies in Lowndes County were arrested last week by local authorities.

According to Lowndes County Sheriff’s Office officials, on Friday, Feb. 28, a masked gunman with a military-style assault rifle entered the Hayneville branch of BancorpSouth bank, located at 10 Commerce St. The gunman ordered bank employees to give him money as he threatened them verbally. He excited the bank and was driven from the scene by a masked accomplice. The vehicle used to flee the scene had been reported stolen in another county and a short time after the robbery it was found in Butler County burning.

On Monday, March 2, the First Citizens Bank in Fort Deposit was robbed shortly before closing. Once again, a masked gunman armed with a military-style assault rifle entered the bank and ordered employees to give him money. The employees complied with his demands and the perpetrator exited the bank where he was driven from the scene by his accomplice. They escaped the area in an SUV. The vehicle was later
discovered in a remote area of Butler County on fire and it had been reported
stolen earlier that same day.

According to Crenshaw County Sheriff’s Office officials, its department received a call concerning a purse stolen out of a vehicle on Thursday, March 12 in the Honoraville area.

Sheriff Terry Mears, Chief Deputy Joey Dickey, Lt. Investigators Stephen Croley and T.J. Gray and Highland Home School Resource Officer Deputy Ed Paulk responded accordingly to set a wide perimeter. Croley found the suspected vehicle at the Country One Stop in Honoraville. Croley proceeded to make contact with the occupant, who was later identified as Carpenter. Carpenter was taken to jail on theft charges from that incident. It was later determined there was another suspect in the incident.

Carpenter was interviewed by Croley and Investigator Sean Klaetsch of the Butler County Sheriff’s Office, along with two agents from the FBI, about several incidents that occurred in both Lowndes and Butler counties. Carpenter confessed to
robbing BancorpSouth in Hayneville and First Citizens Bank in Fort Deposit.

According to the CCSO, Carpenter also implicated a second suspect, Hunter McPherson, in the two robberies.

Carpenter was charged with breaking and entering a vehicle (felony), first-degree theft of property (felony), and first-degree criminal mischief (felony). Both face charges in Lowndes and Butler counties as well.

“It’s a joy to see the professionalism and teamwork displayed culminating in arrests in multiple counties,” Mears said.

Mears added that the Dozier Bank Robbers are still incarcerated as well.

West thanked all of the agencies that worked together to assist to make citizens of all jurisdictions safer by taking these subjects into custody.

McPherson is being held in the John Hulett Detention Center in Hayneville on $500,000 bond and Carpenter was held at the Crenshaw County Jail pending being transferred to Lowndes County.

Advocate office closed to customers due to COVID-19

The Greenville Advocate announced it is temporarily closing its office Monday in response to guidelines issued by the Alabama Department... read more