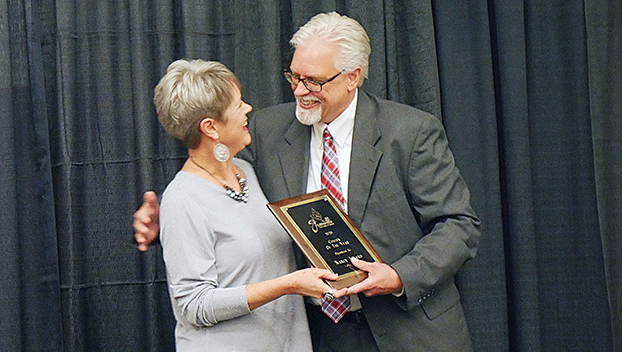 Citizen of the Year Nancy Idland receives a hug from David Norrell. | Photo by Angie Long

Business and professional leaders from across the community gathered at the Wendell Mitchell Conference Center on Lurleen B. Wallace Community College’s Greenville campus last Thursday night to celebrate, congratulate and confer accolades on some of the community’s brightest business stars at the 11th Annual Greenville Area Chamber of Commerce Banquet and Awards Ceremony.

Following a buffet meal provided by the King’s Table Catering with the Chamber Pages and Camellia Girls assisting with serving, the presentations got underway.

Crenshaw shared some of the history of the downtown eatery, which was originally opened in 1947 by a Greek immigrant named Liveakos. James Arthur purchased the restaurant in 1960 and operated it until 2001, when it closed its doors.

The new owners put in substantial work to both bring the Grill up to date and help it retain its retro vibe, hoping to honor the memories of those who grew up with the landmark.

Bates said it had taken a tremendous amount of work to get the Grill up and running again, and expressed gratitude for the support of the local community as well as those traveling through the area.

“We try to treat our customers like they are family. It isn’t easy to be successful as a small business nowadays, but we’ve been blessed,” Jason Reaves, co-owner of the business with his wife, Janet, said.

Casey Rogers, field representative for U.S. Rep. Martha Roby’s office, presented the Large Business of the Year Award to Camellia Communications, a telecommunications company, which started out in 1946 as a small home-based telephone exchange with a single operator in neighboring Lowndes County.

“One thing became crystal clear,” Evelyn Causey, granddaughter of the company’s founders, said. “We had to find a new purpose and pursue it with a new passion. Not too many people want a landline anymore . . . it is apparent that fiber optics infrastructure is the future of telecommunications. We are thankful to have the opportunity to serve Greenville and Butler County in as many areas as possible.”

Kyle Haynes of Q-94 Radio presented Jimmy Dunklin with the Distinguished Business of the Year Award for Greenville Hardware, noting that the longtime retail fixture downtown offered a wide array of products in a unique and inviting setting little changed in the past century.

Dunklin challenged those in attendance to consider local businesses for their needs first, before heading online to retail giants such as Amazon and Wayfair.

“We are all guilty of it, myself included, but consider supporting our community’s businesses and helping our tax base while you do it,” Dunklin said.

Last year’s Spirit of Greenville Award recipient, Abbie Ballew, was on hand to give the 2020 honoree, Danan Whiddon, her award.

Whiddon, owner of Sweet Heart Alabama, a shop featuring holistic products, unusual gift ideas and more, has established herself as a very vocal and visible cheerleader for the Camellia City.

“When I came back home, I had a dream, an Airstream trailer — and not much else,” Whiddon admitted. “What has made my business successful, and what makes Greenville such a vibrant community, is the wonderful people who live here, work here, and have businesses here. I believe in Greenville because of what you guys are doing, what’s going on downtown . . . thank you for inspiring me and for making Greenville such a wonderful place to come home to.”

Mayor Dexter McLendon and lawyer Frank Hickman both spoke about the 2020 recipient of the John D. Murphy Award — the late Richard Hartley, longtime attorney for the City of Greenville, as well as other municipalities in the county and the City of Evergreen.

“This is an award to be treasured by anyone who is a recipient,” Hickman said. “This year’s recipient is the first person to ever be awarded it posthumously. Without a doubt, Richard would be delighted he is the recipient of this particular award. He and John Murphy were good friends, and they both worked tirelessly to make Greenville a better place to live – whether it was related to economic development, the board of education or some other aspect of the community. Richard Hartley was a difference maker, he viewed education as the key.”

The final award, that of Citizen of the Year, was presented by last year’s recipient, David Norrell, to Nancy Idland.

Former owner of Elizabeth Wilson Florist, Main Street director, after school program educator and longtime executive director of the Greenville Area Arts Council, Idland said it was a privilege to receive an award “for doing what you hope is truly enhancing your community.”

“Everything I’ve done over the past years has been because of Bobbie Gamble, who has been the inspiration . . . she is the reason we have the Ritz Theatre standing downtown in Greenville,” Idland said. “Today, she told me what has happened the last 15 years has been the realization of her dream for our community. In all honesty I feel as if I am accepting this award for a large group of people in this community . . . they are from all walks of life. Everyone in our community coming together is what makes this place so special . . . whether writing checks, supporting our shows, buying tickets for those who cannot afford to do so, loving to sing and dance, taking wonderful photographs and videos, making fabulous treats . . . building sets that will never fall apart . . . designing backdrops and posters. All of these people and many more have something special. They have dedication and they see what live theater can do for our community.”

The evening closed out with remarks by Leslie Sanders, vice-president of Alabama Power Southern Division, who spoke of Greenville’s bright future as she shared some encouraging statistics about the community.

This was the second year in which the community at large had the opportunity to give their input on the Chamber awards process.

“In 2019, The Greenville Area Chamber of Commerce decided to get feedback from the citizens in Greenville regarding nominations for business and individual awards,” explained Tracy Salter, Chamber executive director. “The Chamber felt it extremely important that the community have input in this because it’s the community that shops and does business. Criteria was set in place to focus on local businesses and individuals for their positive contributions to the community. Anyone was welcome to submit nominations beginning in January and the nomination process was open for 6 weeks. The nomination process was promoted weekly on social media and the chamber newsletter, and was also featured in local newspapers. Nominations included the name of the business or individual being nominated, a letter of recommendation explaining how the nominee meets each of the eligibility and award criteria. All nominations were submitted to the Chamber’s Awards Committee for consideration. The committee then selected recipients for each award based on criteria and letters of recommendation. With a community full of so many outstanding businesses and individuals, it makes it hard to narrow down the honor to just one recipient in each category each year, but the Chamber is excited and honored to use this banquet as an opportunity to recognize the extraordinary contributions and positive impacts they have on our community.”