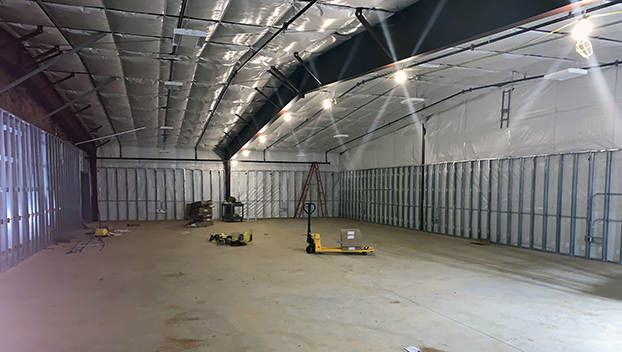 If you’ve driven past Fort Dale Academy in the past three months, you’ve probably noticed some big changes taking shape.

Currently, the Butler County private school, which is celebrating its 50th anniversary, is in the early stages of implementing its five-year Capital Improvement Plan that will catapult the school into the next half-century.

The plan, which includes four phases, was unanimously approved by the FDA Board of Directors in late 2018. Work on Phase 1 — Sports Complex, including practice gymnasium — began in the Fall of 2019.

Board member Patrick Skipper, who also serves as Buildings & Grounds chairman, said a lot of research was performed prior to presenting the plan.

“We talked to administrators, former administrators, coaches, board members, teachers, etc., and put together a plan to try to meet some primary needs of the school, obviously not all of them,” he said. “We wanted their input in doing that and it was critical to get. We presented this plan to the Board in December 2018 and it was unanimously approved. The goal was to obviously meet the needs of the school through capital projects that would be beneficial for the entire school. With the plan, we didn’t want to focus on one single age group or group of people, we wanted every project to impact the entire school. We feel like we’ve done that.”

The plan was three years in the making, according to Skipper.

“It’s been a team effort from contractors to design to fundraisers; no one individual can get a project like this done on their own,” he said. “I appreciate those who have helped and will in the future.”

Skipper, along with the school’s PTA President Leah Ellis, whose organization is overseeing the Capital Improvement Plan funds, and Headmaster Kurt Page, joined Board President Howard Meadows as his guests during a recent Rotary Club of Greenville luncheon. Meadows shared the vision of FDA.

That growth also includes a new parking lot and extended drive connecting the campus, Phase 2; parameter fencing, Phase 3, and stadium and field renovations, Phase 4. The plan is projected to be completed by Summer 2022. Once all four phases are completed the project will have a total price tag of $1.75 million, changing the entire look of the aging campus.

“Fort Dale is an integral part of Butler County economically, employing 89 full- and part-time positions,” Meadows said. “Of course, it is educating our future doctors, lawyers, accountants, manufacturers, farmers, car dealers, insurance salesmen and on and on. As an educational institution, if you’re not moving forward, you are falling behind. It’s with that in mind that I’m so excited about our current Capital Improvement Project.”

Fort Dale took a big swing to start its nearly $2 million Capital Improvement Plan — constructing a more than 15,000 square foot gymnasium — at a cost of $825,000, which includes design and contract administration fees such architect, civil engineers and mechanical engineers for $225,000.

“It started out really fast,” Skipper said. “We started out with a big project on the front end and it has been going really, really quickly.”

Furniture and equipment for the Sports Complex will cost $100,000.

Although the project’s start date was met, weather and other delays are to be expected.

“Any school project, whether its privately funded or publicly funded, has to go to the Alabama Building Commission and get approval,” Skipper said. “That took a little bit more time than we hoped, but we got approval in October 2019 and have been moving forward since. We are pushing hard to finish in the next four weeks.”

Phase 2 of the plan is scheduled to begin this summer and be completed before the school bells ring in the 2020-21 school year.

“This is a summer job obviously because we have to pave a parking lot and drive that’s used, so we’ll have to do this work during an off time for the school,” Skipper said.

“We want to improve safety,” Skipper said. “If you’ve had a kindergartner at Fort Dale, it can be difficult at best sometimes to drop your child off and get out of there in a safe manner, so this will improve that.”

Work will include demolition of the existing drive/parking area near the courtyard off Woodvalley and the construction of a sidewalk for use from Woodvalley to the school’s courtyard. A pedestrian gate will be provided to allow access to the sidewalk.

“The fence design is very similar to the one in front of St. James School on Vaughn Road (in Montgomery), where you have the brick columns,” Skipper said. “We will have brick columns every 24 feet and then a metal fence in between them. It will be aesthetically pleasing, but it will also provide security.”

According to Ellis, the fencing will match the gates on the entrance of the football field.

“All of our columns will coordinate with those and that’s where it will tie in, so that those gates to the football field can be closed and secure that end of campus when school is closed,” she said.

“This funnels people to go to the front of the building, which is what we want,” Skipper added. “In today’s world, you can’t be too careful.”

The estimated start time for Phase 3 is the Summer of 2021 with completion before school begins in August. Total cost will be $125,000.

According to Skipper, Phase 4, renovations to the Eagles’ stadium and athletic field is the second biggest part of the Capital Improvement Plan with a price tag of $600,000.

“If you can imagine, everything on the home field side — concession stand, home side grandstands, press box, the little hut — all of that goes away,” Skipper explained. “Then we are going to start from scratch.”

Work includes new home side bleachers; a concrete or brick pad at the top of the bleachers to provide a seating/walking area for spectators; new lighting, including new concrete poles and the elimination of overhead utilities and wires; widening of the field on both sides to accommodate not only a regulation football field, but also a full soccer field (70×120); correction of drainage issues on both the west and east sides of field; installation of new chain link fencing or barrier around the expanded field and construction of a new press box to include coaching and media booths, event and storage areas, ADA compliant restrooms, a larger concession area and spirit area and the installation of an improved sound system.

In addition, improvements will be made to the practice field area to make the southwestern area  of the upper field better, including adding sprinklers, leveling and a protective barrier once completed. Additional parking will also be added near the new press box where the current concession sits for use by disabled spectators.

“This will improve aesthetics and function of the football and soccer field and surrounding areas, and we believe generates excitement around the athletic programs as a whole,” Skipper said.

Plans are to begin work on Phase 4 in the Spring of 2022 with completion during the Summer of 2022.

“This one is going to be tight because we have soccer season, which runs until about May and then football kicks off in August, so we’ll have to be pretty tight on our timeline to get that done,” Skipper said. “I’m sure we’ll have equipment lined up, so as soon as the last soccer game is over, we’ll be moving dirt.”

As with most large Capital Improvement Projects, it all comes down to the money being spent. FDA’s is no different as it relies solely on private donations.

“One of the best things about the project is that we’re not going to pull a dime from our tuition and our normal funds,” Skipper said. “As you know, Fort Dale is a private school, we survive on tuition, no public funds, so we’re going to leave that alone.”

That being said, funds to complete the extensive project are still being raised through one-time donations as well as five-year pledges.

“We are asking for individuals and organizations to participate,” Skipper said.

“We are heavily front-end loaded on this thing, but we thankfully had folks step up and make that a possibility,” Skipper said.

The PTA is handling the fundraising efforts for the school.

“The main thing that a lot of people don’t know is that the PTA — is handling this Capital Campaign Project — we are a 501(c)(3) organization, so your donation is completely tax deductible,” Ellis said. “We will provide you with the information you need to get your tax deduction for your donation to us.”

If money is not in hand, the project will not continue, according to Ellis.

“We will not move forward with a project if we cannot fund it,” she concluded. “If we don’t have the money to finish it, to move to Phases 3 and 4, then we won’t do those until we have the funds.”