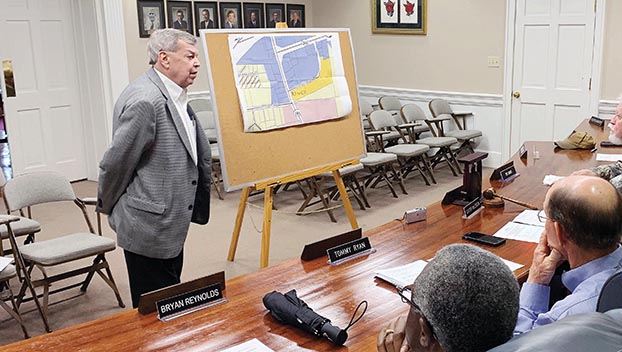 The late Richie Hartley speaks to members of the Greenville Planning Board and City Council during a meeting in late 2019. | Photo by Adam Prestridge

The son of the late Paul Dudley Hartley, a local attorney, and Harper Gantt Hartley, an educator, Hartley was a 1963 graduate of Greenville High School. Following his graduation from GHS, Hartley chose to follow in his father’s footsteps and study the law.

After earning an undergraduate degree in commerce and business administration from The University of Alabama in 1968, he went on to earn a law degree from UA in 1971 and passed the bar to practice law that same year.

Hartley began his law practice with the law firm of Rogers and Scott, which later became Rogers, Scott and Hartley. In 1976, Hartley formed the partnership of Hartley and Hickman with Frank Hickman, practicing there until his death.

“Richie and I practiced law together for 43 years, and for the first 35 years, we practiced on a handshake agreement,” Hickman recalled. “We never had any serious disagreements.”

His longtime law partner describes Hartley as a man highly regarded and well thought of by clients and lawyer peers alike.

“Richie was generally perceived to be the lawyer with the most knowledge about governmental operations, including cities, towns, economic and industrial development boards,” Hickman said.

“His absence leaves a vast void for all these cities and towns,” Hickman said. “He will definitely be missed across Butler County and in Evergreen.”

“It’s like somebody cut my right arm off to be quite honest with you because he just did so much and he gave good advice,” McLendon said. “We didn’t always agree politically, but I felt like we always had respect for one another. I had a friend say something to me that other day that meant so much to me. He said, ‘You and Richie were good for one another.’ He was sure good for me and I hope I helped out a little bit on the other end. He loved Greenville and Butler County. The main thing is, he left this place better than he found it.”

Hartley was commissioned as a 2nd Lieutenant in the United States Army Reserve in 1968 and ended his military service as a Captain in 1976. A lifelong member of St. Thomas Episcopal Church in Greenville, he served in various Vestry positions between 1971 and 1996 and was also a Sunday School teacher and Lay Reader.

Hickman describes his longtime law partner as a man who “worked hard and lived hard.”

“Richard did not do anything halfway,” Hickman said. “He was a difference maker in life, in the practice of law and he cast a large shadow.”

Hickman remembers a man of keen intelligence who loved reading; a man driven to be the best lawyer he possibly could.

“For the first 30 years of our practice, he and I spent more of our time with our work at our law practice than we spent at home with our families,” Hickman said. “I am not sure if that is good or bad. However, I do know that you cannot be a good lawyer unless you work hard at being one. It is true that the law is a ‘jealous mistress’ and she beguiled both of us.”

Hartley was determined to do his best for every client, no matter their socioeconomic background, Hickman says.

“Richard worked just as hard for those who could not pay him as he did for those who could pay,” Hickman said. “It made no difference; if he saw a need for justice to be done or a helpless person to be helped, he was ready. Richard viewed the practice of law as a public service job.”

Hartley also saw the importance of giving back to the community that nurtured you. Some of his happiest high school memories centered around his time as a member of the GHS Tiger Pride Band, says his widow, Marion.

“I teased him when we started dating and he told me he was in the band,” she explained. “At my high school, it was all about the football team, but he made it plain to me the band was a big deal in Greenville. He played the trumpet and always talked about how much fun he had during his band years at Greenville High. When the band really started the process of rebuilding, he started donating to the Band Boosters to help them.”

“The last time I visited Richard in person, he was joyfully reminiscent about his time in the band, and pretty darn boastful about his trumpet skills, and his halftime solo in the song ‘Night Train,’” Shealy said. “In the midst of a cancer battle and feeling terrible, he laughed and smiled over these memories. He has been a wonderful cheerleader for our program and a sponsor of our inaugural Christmas at the Ritz.”

And when it came time for the family to decide how they might memorialize Hartley, it came to them: donations to his alma mater’s band program.

Members of the GHS Tiger Pride Band came and performed a verse of “Amazing Grace” at Hartley’s graveside service at Magnolia Cemetery.

“It was so kind and so meaningful to us as a family; I just know Richard would have appreciated it, too,” Marion said.

Shealy believes one of the band’s greatest champions deserved no less.

“Our band was so honored to be able to play for his service,” she said. “We plan to use the gifts from this memorial to honor him and his family in a special way later this year.”

Hickman says he will miss the man who was “my friend in the good times and the bad times.”

“I know that this community is a better place because Richard lived his dream of practicing law in his hometown,” he concluded. “His father, a lawyer, would be proud of his efforts and dedication to the law. Richard’s family is proud of his accomplishments. We should all celebrate a life well lived.”