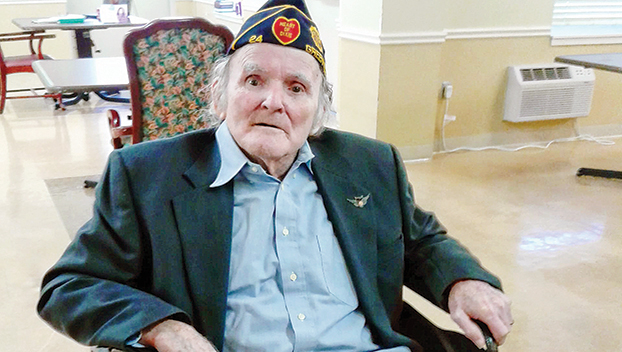 He was a proud 20-year member of the United States Marine Corps, serving as instructor, pilot and mechanic during his time in the Corps. Later, he worked for Bell Helicopters, then toiled in the oil fields and on rigs.

However, after years of adventurous travel, he came back to settle down in Alabama and start a new venture with a lawn care service.

“Daddy once told me that his father, Mansellus Odom, used to give out pennies to youngsters he encountered,” Odom’s daughter, Suzie Smith, said. “Later on, Daddy started giving out quarters — and that’s how he got his nickname.”

Granddaughter, Jessicanne Odom, who grew up with brother, Daniel, in their grandparents’ home, recalls the man she knew as “Pop” never leaving home without a pocketful of quarters.

“He gave them to all the kids he’d see while he was out,” Jessicanne shared. “Some of the little kids got to where they would see him and walk up expecting their quarters. Pop told me when he served overseas, he always wanted to help some of the kids, but wasn’t allowed to. He knew he could do it here. He used to say, ‘Maybe if I give them a quarter, they will go and give a quarter to someone else.’ He wanted to encourage the kids to give and share. He had a big, generous heart.”

The Quarter Man’s career odyssey began in 1956 when the raw recruit of only 16 joined the USMC and traveled to Parris Island, N.C. There, he encountered a drill instructor “he didn’t think much of,” recalled Smith.

“There was a famous occurrence known as the ‘Ribbon Creek Incident’ — there have been books written about it — that took place on April 18, 1956,” she said. “Staff Sgt. Matthew McKeown took his men out in the dark through a cold, swampy creek to ‘toughen them up.’ Well, it backfired and six of the men died. One’s body sunk so deep it took days to find him.”

The young recruit might have been among those who perished, if he had not been recovering from pneumonia in a military hospital at the time of the deadly march.

“I just feel like God was looking out for Daddy,” Smith said.

Odom spent 1956 to 1961 serving in Japan. He was based just 25 miles south of Hiroshima, where the first of two nuclear bombs was dropped to help bring about the end of WWII.

In October 1962, just a short time after Smith’s parents married and settled into military life back in the U.S.,  the news was filled with stories about what became known as the Cuban Missile Crisis.

“Mama was watching TV and I guess you could say she just knew,” Smith said. “When Daddy came home, she already had all his uniforms pressed and packed. That was a really scary time for the country. Ultimately, Daddy ended up helping escort the Russians back home. He actually got a special commendation from President (John F.) Kennedy. Daddy was very proud of that.”

Odom also served two tours of duty in Vietnam — and those were memories her father did not relish, Smith recalled.

“He never really talked about his time over there,” she explained. “And somehow, I just seemed to know not to ask him. One thing I remember is when he got his orders to return for his second tour, Daddy just sat on the edge of his bed and cried.”

Smith recalls that her parents would send letters and cassette tapes to each other during those years.

“I only got to listen to part of the tapes Daddy sent,” she said. “Once I slipped into the living room and listened to the part he didn’t want me to hear. There was the sound of bombs dropping — it was only much later that we realized Daddy suffered from PTSD; they just didn’t have a name for it then. I just know Vietnam changed my daddy. I could see it in his face.”

Happier memories were also made, too. In 1966, a short time before Smith’s brother, Sam, was born, her dad received recognition for an invention he developed for use on military ships.

“It was a sort of sling device with a platform that made it easier to load and unload cargo in the ships,” Smith said. “They paid him $100 and a photo of him with his invention ran in the newspaper. Mama went out and bought up every copy she could find.”

Smith also remembers running up and down the halls at her father’s station at Camp Pendleton in California.

“He had a classroom there where he taught his students how to dismantle airplanes,” Smith laughed. “He said he could probably do it in his sleep. In fact, he sometimes talked about it in his sleep.”

“We had a house here in Greenville,” Smith explained. “There was a house Daddy shared with his fellow workers over there, and one he planned to buy for our family.”

But his plans had to change.

The overseas job was in faraway Iran. Political turbulence in the late 1970s ultimately led to the overthrow of Iran’s monarch, the Shah, and the infamous period during which more than 50 U.S. diplomats and citizens were held hostage in Tehran for 444 days.

“Things got really bad in late 1979 and they were telling all the Americans to get out as soon as possible. They were having to hide, to disguise themselves . . . Daddy had dark hair and eyes anyway, and his skin tanned easily. It made it easier for him to blend in,” explained Smith.

Jessicanne remembers her grandfather’s stories of that harrowing journey out of danger.

“Pop was on the very last plane — they had to smuggle him out,” she said.

God, his daughter says, was once again looking out for Siegmund Odom.

For 22 years following his return to the U.S., Odom traveled, working oil fields and on rigs around the world, including Venezuela and Mexico

“Pop said he traveled to every continent except Australia.”

Finally, he decided to “retire,” still keeping busy with the lawn care business. He was also busy helping raise Jessicanne and her brother, Samuel.

“We had a great childhood,” Jessicanne recalled. “He taught us both how to drive on the dirt roads. He even picked out my first prom dress for me — we found it at the dry cleaners in their unclaimed dresses. It was blue with blue-green sequins and I loved it.”

Daniel remembers the first time he got a girl’s number and needed a little help.

“I wanted to get a phone card so I could call her. Pop thought I was crazy to want to spend the money on one, but he got it for me anyway — no one else was as willing to spend time with us like he was,” Daniel recalled.

Jessicanne agrees, adding, “Whenever we needed him, he was there.”

And not just for his family.

“Pop was really the man who would give you the shirt off his back,” Jessicanne said. “When he couldn’t drive anymore and I drove him places, if he saw someone in need on the side of the road, he’d make sure we stopped and helped them. Once, we met a homeless guy and Pop invited him home for supper — and he came.”

Time and ill health eventually took their toll. Dementia cruelly robbed the beloved father and grandfather of many of his memories.

A short time before Odom passed away, Comfort Care Hospice held a special celebration honoring their patient for his service to his country — an event his daughter will always treasure.

“We lost some of his mementos in a house fire, but we were able to save some things and display them that day,” she explained.

Given a full military funeral, Odom received a 21-gun salute and an extra honor — the playing of “Taps,” not via a recording, but by Ruth Ann Nimmer, a band member and JROTC cadet at Greenville High School.

“I like to think Daddy knew she was there and he was proud,” Smith concluded.