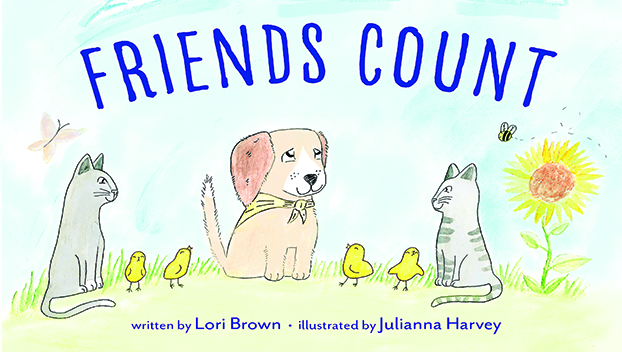 Lori Brown, the Butler County School System’s gifted teacher, began promoting her first published book, “Friends Count,” earlier this month and is receiving overwhelming support from her family, peers and community. It is the first in the “Dudley & Friends” series of five children’s picture books the 46-year-old writer will publish.

“I just want to thank everyone for their kind words about my book release,” she said Monday night via a Facebook post. “I am so excited that my dream of becoming a published author is finally becoming reality. Thank you so, so much to those of you who have already pre-ordered your copy. I will be glad to sign it once you receive it. My advice to everyone is if you have a dream that you haven’t reached yet, keep pushing. Don’t let anything keep you from achieving it.”

Brown said that she has always “loved” to write. In fact, she said that “Friends Count” was actually first written in 2004 and has been revised over the years.

“As the years matured, so did my writing,” Brown added. “I have always loved to write. It has always been in my blood, but I had several mentors throughout the years who encouraged me to keep writing and never give up.”

Brown said that her first mentor was Betsy Waggoner, who taught creative writing and helped her develop her skills. Later in college, Bev Smith at Lurleen B. Wallace Community College, Dr. Michael Orlofsky at Troy University and Dr. Terry Ley at Auburn University continued encouraging Brown and helping her cultivate her writing talents.

In addition to her teachers, Brown said that she could not have been “the slightest bit” successful without the support of her family, including husband, Miles, who is principal at McKenzie School. She said her family walked with her through the entire journey and never gave up on her.

“It is awesome to see her living her dream,” Miles said.

Last, but certainly not least, Brown said that she would not be where she is today without God.

“As a result of a childhood accident, I could have died when I was three,” Brown explained. “God had a plan for me and I survived. My advice to people who feel like they want to give up and that they will never be successful is, ‘Believe in God’s timing and let him light your path. He will help you achieve your greatest goals in life.’”

Brown shared the story of her accident during an interview in 2018.

“When I was 3-years-old I was shot in the head with .25 caliber pistol at point blank range,” she explained. “This was in 1977. It happened in Marengo County when my family, some friends and I were on the Tom Bigbee River. My sister, her friends and I all thought it was a play gun. Obviously, it was not. My sister’s friend, who was 5 years old at the time, accidentally shot me.”

Brown said the bullet entered her head just above her right eye. She said it took several surgeries in Meridian, Miss., to save her life. The injury caused Brown to lose the use of her left arm and has caused seizures throughout her life.

In 1989, she and her family moved to McKenzie where her dad, Billy Pritchett, took over as the McKenzie School’s principal. He stayed in that position until 1999. Brown graduated from McKenzie in 1992 and married after college.

“Friends Count” which is illustrated by Julianna Harvey, is about a dog who starts a journey alone, but along the way meets new friends and discovers new things while counting to 10. Dudley the dog is all alone with his bone when he meets a pair of cats. He abandons the bone for a day of fun and adventure with his new friends. The story is told in a series of rhyming couplets, with vibrant descriptions of all the animals and the world around them. Dudley learns that not only is it fun to count with friends, but he can count on them too.

The story ends with Dudley anticipating the fact that school will be starting soon, which sets the stage for the next book about his first day at school.

“This book really has a double meaning,” Brown said. “Friends counting numerically and friends count meaning that they are important.”

“This is a type of publishing company where I get to approve everything about my book,” she said. “The publisher checked and double-checked with me before finalizing anything. My books are rhyming books and I was told over and over that rhyming books won’t sell. That comment made no sense at all to me because of the Dr. Seuss books, but that is what I was told over and over again. I briefly considered rewriting the book in a non-rhyming format, but I just couldn’t. My style of writing is just that “my style” and whether someone wanted to publish it or not I was not going to change. I learned to never give up on my dream and not to vary from who I am through this process. My book became exactly what I wanted it to.”

Now that her book is set to begin circulating, Brown said that she plans to visit schools in Butler County and surrounding areas to tell her story and read “Friends Count” to them.

“My book is intended to be a supplemental educational resource,” she said. “It is a proven fact that students learn through repetition and rhyming helps with memorization.”

With family in mind, Brown also dedicated “Friends Count” to her niece, Anna, who passed away a little over two years ago. A portion of the book sales sold at schools will go to the Joy Like Anna Foundation set up by her parents.

“Anna loved sunflowers,” Brown concluded. “There are sunflowers positioned all throughout the book. Anna’s smile could light up any room and she touched every person who had the pleasure of knowing her.”