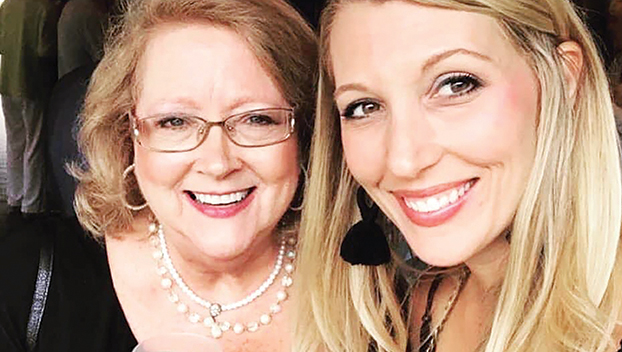 The late Jean Hardin, left, smiles big for a photo with one of her nieces, Leah Utley Coles, during a family wedding. | Submitted Photo

Selflessness is defined as “concern more with the needs and wishes of others than with one’s own.”

That statement characterizes Greenville’s beloved educator, friend and daughter, Jean Amanda Hardin, precisely. The Bright Beginnings Pre-K teacher poured her heart into every letter taught and number counted, while embracing every hug received as she made lasting impressions on not only the children that were fortunate to call her “Miss Jean,” but the parents and fellow educators that learned from her every action.

The classrooms at the Pre-K school are dimmer this week following the untimely death of the 64-year-old career educator. She passed away last Monday, Jan. 13, following a brief illness.

Hardin will be remembered by many for her love for school celebrations and parties as well as the holidays.

“Every holiday at school or fun activity day, she would go above and beyond to get in character,” Brady said. “Whether it was a dog costume, bear or rabbit, she did it as only Jean could do. No one else could pull off wearing those costumes like her.”

Hardin began her nearly 30-year teaching career in January 1978 at Baptist Hill Kindergarten. She later taught at W.O. Parmer Elementary and then Bright Beginnings Pre-K. She also worked as the first Children’s Librarian at the Greenville-Butler County Public Library from 1999 until 2008. She retired from the Butler County School System in December 2019.

“She was there with us until a few weeks ago,” Brady said.

“A loss like that, you don’t recover from; you just don’t,” he said as he fought back emotions. “She is as much a part of the fiber here as anything. You don’t replace that. You hire another individual — as we have — who is
actually one of her students and one of her paraprofessionals.”

“Jean trained her, taught her and pegged her as the person to replace her one day,” Eiland said. “You don’t replace people like Jean.”

Hardin’s auxiliary teacher Johnathan O. Grace was privileged to work in the same room with Hardin for four years. He said that Hardin was always teaching — even when she didn’t know it.

“Miss Jean brought a lot of joy to the room,” he said. “I enjoyed working with Jean. She wasn’t a co-worker, but family to me. Jean is the reason why I fell in love with Bright Beginnings. Working with her was like a fairy tale.”

“Teaching came as natural as walking for Jean,” she added.

Hardin’s love for education also spilled over to her affection for her community and the hundreds of friendships formed over more than six decades.

“Jean was an inspiration to me,” fellow educator and family friend, Todd Henderson, who currently serves as McKenzie School counselor, said. “She had intelligence, wit, charm and a caring heart that made her a great friend. I admired all the wonderful qualities that made her the special person she was. Jean will be greatly missed by everyone who knew her, but our memories of her warmth, kindness and gentle spirit will be remembered and cherished forever.”

Hardin became friends with several of her students later in life. Many recalled stories of their beloved teacher.

“‘Miss’ Hardin was my K5 teacher in 1982-83,” Greenville business owner Stacey Edwards said. “I loved every single thing about her. She had an unbelievable talent of making you feel as if you were the only child in the classroom. She bragged on our art or our gymnastics, she laughed at our bad behavior and corrected us in the most loving ways. Her laughter was like sunshine. She was a fairytale princess before I knew what that was. Even as an adult, I was still in awe of her. My favorite story of Miss Hardin was during nap time. I never remember napping and think that was part of the reasons for my special attention. I had a beach towel with palm trees and a sunset. While everyone else was sleeping, she let me climb on top of the table and hula dance. She was a conspirator and one of the most loving adults a kid could ever be around. She will be so missed.”

Hardin’s creativity in the classroom was also mesmerizing.

“Jean was the most creative teacher I have ever known,” Brady said. “I began teaching with her 20 years ago. I learned more from watching her than I did from any class I took in college.”

Not only were the children in Hardin’s classes taught the building blocks of education, but they were also served a daily dose of love and affection.

“Jean’s smile and laughter — that’s what I’ll miss most,” Brady said. “The way you felt just being around her. You couldn’t be around her long without putting a smile on your own face.”

Eiland added that Hardin was a true Southern lady.

“Her grace and her beauty — those girls in the class especially — loved her and loved to look at her,” he said. “She made every one of them feel beautiful. She is a loss not only to this school system, but the community as a whole.”

Hardin graduated from Fort Dale Academy in 1974 and then attended the University of Alabama, graduating in 1977 with a bachelor’s degree in Early Childhood Education. Later, she received her master’s degree from Alabama State University. She was very active in the communities throughout Butler County and most recently served as president of Delta Kappa Gamma, International Society for Women Educators. She also founded the Pink Poodles, which she founded as an after-school club for girls.

“She truly was one of a kind and someone who made me a better teacher and person for knowing her,” Brady concluded.