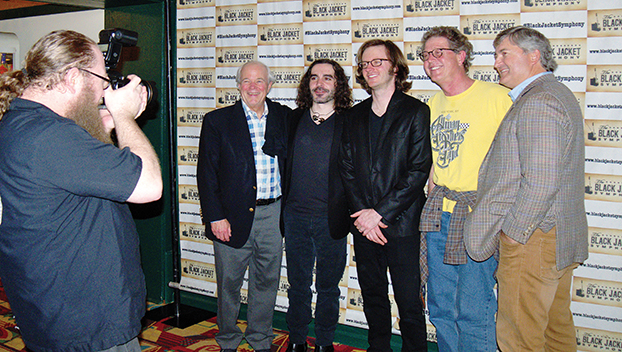 Third time was more than “the charm” for the Black Jacket Symphony and its Camellia City audience last Thursday night at the Ritz.

BJS, which had performed twice before as part of the Greenville Area Arts Council’s artistic seasons, bringing the music of legendary groups Fleetwood Mac and The Eagles to the downtown stage, struck gold yet again with The Allman Brothers: Brothers and
Sisters.

Throughout the concert, the near-sell-out audience cheered, clapped and “hooted and hollered,” showing plenty of love and appreciation for the top-flight musicians’ performance of classic southern rock and blues numbers. A dazzling light show, featuring more than 35 onstage lights with constantly changing colors and patterns, was synced with the excellent, if intense, auditory experience. Following the opening set featuring the music from “Brothers and Sisters,” the band closed out the night with a second set of the Allman Brothers’ greatest hits.

Described as a “unique concert experience recreating classic albums in a live performance setting,” the goal of BJS’s concerts is to perform artists’ selected albums in their entirety, with the musicians selected for each album hand-picked to perform.

The GAAC production earned rave reviews across social media, with many commenting that it brought back great musical memories.

“The lights weren’t even really necessary — the musicians were so good the extras weren’t needed,” noted Mary McKinley of Greenville.

The group also praised the hospitality they had been shown during their time in the Camellia City, giving shout-outs to local eatery the Alabama Grill and to GAAC Executive Director Nancy Idland.

“I don’t think we’ve ever seen anyone with more passion for bringing the arts to her community than Nancy has,” BJS’s manager said.

Following the concert, some of the BJS members also met with attendees and posed for photos in the front lobby to cap the night.

Prior to the 7 p.m. concert, GAAC members were invited to enjoy a bevy of sweet and savory treats and refreshing libations in the Ritz Reception Room, colorfully decorated for the evening with giant tissue paper flowers in bold colors, along with the city’s signature flower, the camellia.

The final GAAC production for season No. 38 is set for Thursday night, Feb. 20. The concert will feature three grandchildren of Butler County’s native son, Hank Williams Sr., as Holly, Hilary and Sam Williams perform as part of “A Family Tradition.”