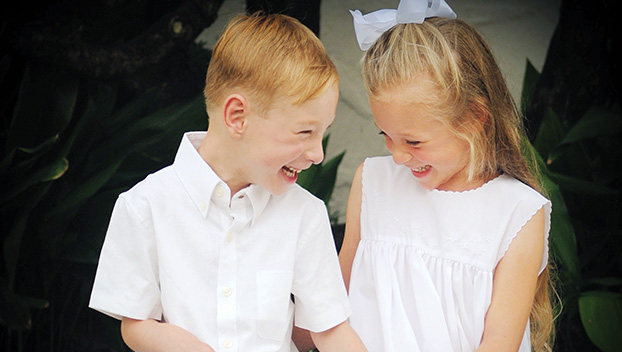 Levi Bush and his twin sister, Harper, share a laugh during a photo session. | Submitted Photo

If you ever doubted the existence of superheroes, you never met Levi Bush.

Although tiny in stature, the seven-year-old McKenzie crusader packed a powerful punch when it came to teaching those around him that life is what you make it.

From the moment the McKenzie School first-grader was born until he took his final breath earlier this month, the odds were stacked against him. However, despite five major surgeries, dozens of doctors’ visits and at times struggling to breathe and walk, he never allowed his challenges to dampen his spirit or erase his infectious smile.

Kenneth Levi Bush’s lifelong battle with heart-related issues and intestinal complications ended Jan. 2, while hospitalized at Children’s of Alabama in Birmingham. Nevertheless, his legacy will continue to live on through the people he loved and positively impacted during his short, but influential life.

“He loved hard,” his mother, Casey, said as she wiped away tears. “He was always very happy. I just hope that he is remembered for being strong.”

“They were the first family I met with when I got here in August 2017, when I was made aware that he was going to need some special attention,” Eiland explained. “They were eager to get him acclimated to school — he has a twin — and they wanted to keep them together in school as long as they could, so he could have some normalcy.”

A regular routine then became the goal of Eiland and McKenzie School officials.

“They provided everything that Levi needed,” Casey said.

Levi’s schooling began with homebound services with teacher Sandy Hutton. As he progressed, the young Tiger later attended school for a few hours before ultimately becoming a full-time student with assistance from nurse Tiffany Sanders.

“The thing about Levi was that he had this amazing zest for life; he wanted so badly to be like every other child,” Eiland said. “Except for the obvious complications that he had, he was. He participated in PE and at home, he was a typical boy riding 4-wheelers out in the woods with his dad, Travis, doing all the things that you would anticipate a little boy growing up in the great community of McKenzie doing.”

According to Casey, the Town of McKenzie and its residents have showered her family with love and support since Levi’s death.

“The town’s support has been outstanding; you couldn’t ask for better,” she said. “Everybody at the hospital asked if we had a good support system — they didn’t understand where we come from.”

Eiland said Levi’s positive attitude and outlook on life also impacted everyone within the walls of McKenzie School.

“In his short time, he changed lives at McKenzie School,” he said. “He had this amazing attitude. Any pictures that you saw of him, you always saw him with this huge smile. He had a great attitude, but faced insurmountable difficulties with his health.”

Levi’s health problems were discovered early. When Casey was 20 weeks pregnant, doctors revealed that he would be born with several defects and referred her to a high-risk pregnancy doctor. Ten weeks later, on Sept. 17, 2012, Levi and his twin sister, Harper, were born premature.

Almost immediately, Levi’s health struggles began. His full diagnosis included heterotaxy, a condition characterized by internal organs that are not arranged as would be expected in the chest and abdomen; an AV canal defect or a hole in the center of his heart; pulmonary atresia, a form of heart disease in which the pulmonary valve does not form properly; PAPVR (partial anomalous pulmonary venous return),  a rare cause of adult onset pulmonary arterial hypertension (PAH) that can present with a wide spectrum of severity from early childhood throughout adult life and malrotation of the intestines also called twisted intestines, which occurs when the intestine does not twist correctly.

“He never complained — even at his sickest,” Casey said.

The twins were released from the hospital the day after Christmas, nearly three months after being born. Both infants had to gain weight before being released, however, once Levi was four pounds — two months after his birth — he underwent his first heart surgery.

Despite his long list of health issues, Levi persevered and continued to lead as normal of a life as possible.

“He wanted to play like any other little boy,” Casey said. “He didn’t want you holding him back. If he fell down, he was getting right back up and running off.”

Getting dirty outdoors was high on Levi’s priority list.

“He loved to play outside with his ‘dirt toys,’ I call them,” Levi’s grandmother, Pam Seales, said.

“He liked to play in the dirt with dump trucks,” Casey added. “He liked to go hunting and fishing and ride the tractor.”

Levi also enjoyed watching superheroes in action and tuning into cartoons on television. Captain America and Blaze from the hit Nickelodeon cartoon, “Paw Patrol,” were two of his favorite characters.

Through it all, Harper was by his side.

“They were best friends,” Casey said.

On Nov. 27, 2019, Levi was hospitalized for plural effusion, often referred to as “water on the lungs,” which is the build-up of excess fluid between the layers of the pleura outside the lungs. He had been battling the issue since August 2018 after his Fontan procedure, the third and last of the staged congenital heart surgeries performed to treat hypoplastic left heart syndrome (HLHS) and other single ventricle heart defects. During a Fontan surgery, congenital heart surgeons reroute the blood flow from the lower body to the lungs by connecting the inferior vena cava to the pulmonary artery.

“He started complaining of stomach pain just prior to insurance approval,” Casey said. “He was crying and didn’t want to get out of bed.”

A series of X-rays performed on Dec. 18, revealed gas and free air in Levi’s abdomen. He was quickly rushed to the Cardiac Intensive Care Unit, and within 15 minutes was wheeled back to the operating room for gastrointestinal surgery to search for a perforation.

“Before coming out of surgery, we were confronted by the doctor, who informed us that Levi was not able to maintain his blood pressure,” Casey explained. “They were not sure he would even survive surgery. So we had to make the decision of putting him on life support if it came to that.”

With heavy hearts, Levi’s family awaited an update from the surgeons, which later informed them that Levi had stabilized and the surgery was completed.

“It was very touch and go through the whole procedure,” Pam said.

Immediately following the surgery, however, Levi went into septic shock due to leaking from his colon and infection. Then he rallied.

“Four days after surgery, they took the breathing tube out and he started talking and being Levi,” Casey tearfully said.

According to Pam, the doctors began reducing or de-escalating Levi’s antibiotics, which can improve treatment. It also helps to prevent antibiotic overuse, which causes resistance.

“In the time of him not being on antibiotics, he developed a lot of infection in the abdomen and he was too weak to overcome it,” Pam said.

“It was a total shock because we weren’t in their for stomach issues, we were in there for cardiac issues,” Casey said.

Levi was laid to rest Jan. 6, in Sweet Home Baptist Church Cemetery. The outpouring of love shown during his life celebration was overwhelming for the Bush family. In addition to family, friends, educators and community members, 22 nurses, one of Levi’s doctors and a nurse practitioner made the three-hour trip from the Birmingham area to honor him.

“I wasn’t expecting that many,” Casey said. “They told me a group was coming and I was thinking it would be how many could fit in the car.”

In addition to his parents and twin sister, Levi is also survived by his four-year-old sister, Emery; grandparents, Pam Seales and Ray and Phyllis Bush, and great grandparents, Wayne and Patsy Seales and Clayton and Lottie Campbell.

According to Casey, the support shown by family, Travis’ employer, Bluegrass Bit Company in Greenville, and their churches Sweet Home Baptist and Grace Baptist, along with the care from Lamenda Blakeney, M.D. with Partners in Pediatrics in Montgomery, has been a blessing every step of Levi’s journey.

Nevertheless, through all of his ups and downs, Levi’s impact on those he crossed paths with — young and old alike — during his short life, were greatly impacted. None more so than his mother.

“He taught me to never give up,” Casey concluded.

Proving that Levi was in fact a superhero himself.