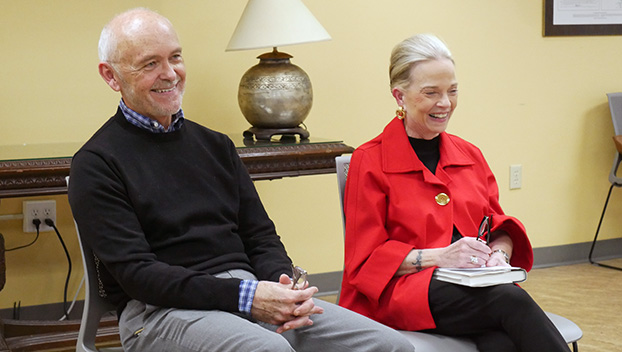 Peggy Wallace Kennedy and her husband, Justice H. Mark Kennedy enjoy a laugh during the book event Monday at the GBCPL. | Photo by Angie Long

She was a little girl from Barbour County, with a stay-at-home mom and a dad who served as a judge. Then one day her father decided to step away from his judgeship and run for governor in 1958.

That little girl was Peggy Wallace, and both her parents, George and Lurleen Wallace, served in Alabama’s highest office through some of the state’s and nation’s most turbulent years.

The book is not a historical narrative, but the reflections of a daughter, wife and mother who had to come to terms with her larger-than-life father’s controversial rhetoric and his infamous “stand in the schoolhouse door” and reconcile it all with her own personal beliefs.

Wallace Kennedy’s memoir, The Broken Road: George Wallace and a Daughter’s Journey to Reconciliation, was published in late 2019 to considerable critical acclaim.

Those in attendance heard Wallace Kennedy read several passages from her book, some touchingly poignant and not without pain, and others filled with the humor that perhaps only a true southerner can understand.

Her father’s failed attempt to win the governorship in 1958 left him unemployed, unhappy and often absent from home, with a family teetering on the edge of poverty.

But there was that saving grace. When things got particularly bad at their home in Clayton, their mother would round up the kids and head to a happier place. “Look for the broken road,” she would tell them as she drove. The abandoned road bed, buckled and bent by heat and time and enveloped in kudzu vines, was not far from a place where there was food and love and no one arguing — their grandparents’ home.

It was Lurleen Wallace’s desire not to see her family return to that former life of poverty that led her to run for governor when her husband was no longer eligible for another term.

“I did not want my mother to run. And I told her . . . I did not know she had cancer but she knew, even before she ran. She was only in office for 18 months . . . but during that time she bought and furnished a house for us to live in after she was gone. She was trying to take care of us,” Wallace Kennedy explained.

The proper young lady who was taught “to smile, sit straight, and not speak up” as her adored father took the political stage eventually had to find her way, and her voice, as she crafted her own chapter in the Wallace saga.

She recalled a visit the Kennedys made in the mid-1990s with their nine-year-old son Burns to the Martin Luther King, Jr. exhibit in Atlanta.

“As we moved through the exhibits, we turned a corner to face photographs of the Edmund Pettis Bridge, the bombed-out 16th Street Baptist Church, fire hoses and dogs in Birmingham and Daddy standing in the schoolhouse door. Burns turned to me. ‘Why did Paw Paw do those things to other people?’ I knelt beside Burns and drew him close. ‘Paw Paw never told me why he did those things to other people. But I do know that he was wrong. So maybe it will just have to be up to you and me to help make things right.’”

Wallace Kennedy began speaking to groups all over the country as part of her effort to establish common ground between the races and seek reconciliation. In 2009, she was asked to be a part of an event at Selma’s Edmund Pettis Bridge along with legendary civil rights activists John Lewis, Joseph Lowery, Jesse Jackson, and America’s first African-American attorney general, Eric Holder. At first, she shied away from involvement. She knew it would be a difficult test for the daughter of the man who had allowed the beatings of some of the very people she would be addressing that day to speak before them. But, somehow, Wallace Kennedy knew she had to do it.

“My mouth was so dry in their company my little handler just kept giving me mints . . . and then John Lewis took my hand and together, we walked onto the bridge,” she recalled.

As the pair stood there watching the Alabama River below them, Lewis added these words: “Well, sister, I guess it’s time for us to move forward . . .”

Wallace Kennedy said in those moments she finally felt she had found the courage to step away and find her true self.

For almost 10 years she worked on sharing her story through writing her memoirs, aided by her husband, and with the willing support of the couple’s two sons and their wives. From proofreading chapters to researching the quotes from southern writers that graced the beginning of each chapter, The Broken Road proved to be a family affair.

Justice Kennedy described his wife as a very courageous woman. “You look at her, and she’s not very large in stature. But I have learned there is a formidable woman inside that little frame,” he  said, adding, “We really believe this book can make a difference for people across the country.”

Both the Kennedys expressed their pleasure in being able to speak to a hometown crowd. “I look around and see my classmates, teachers, old friends and of course, family here and it’s really wonderful,” Justice Kennedy said.

“Greenville will always have such a special place in my heart,” Wallace Kennedy added.

The Kennedys held a brief Q & A with their audience after they spoke, and closed out the event with book signings and the chance to chat with those in attendance.

The couple said they would soon be returning to their book tour schedule, but encouraged those who lived locally and did not yet have their copies of the memoir to feel free to give their copies to one of Mark’s family members “and they will get them to us and we’ll get them signed and returned,” Mark Kennedy said.

The Broken Road is available for purchase from a number of bookstores and other retail outlets, including Books-A-Million and Barnes and Nobles, along with Amazon.com and BAM.com