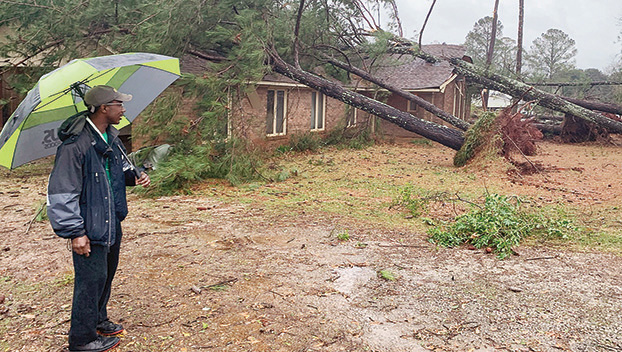 Derrick Gordon assess the damage caused to his house located at 2425 Luverne Hwy. in Greenville. | Photo by Adam Prestridge

Derrick Gordon and his wife, Kimberly, took cover in one of their bathrooms as last Saturday afternoon’s severe storm and straight-line winds hammered down on their home located just a few miles east of Downtown Greenville.

Trees could be heard popping amid the roar of gusting winds, some of which exceeded 70 mph. It was a scary few minutes for the couple.

“It happened so fast,” he said from underneath an umbrella as he assessed the extensive damage to his home late Saturday afternoon. “Earlier today — around lunchtime — a limb had fallen and we moved it out of the way, then all of a sudden this came through. It turned white and got really loud, and, all of a sudden, stuff just started falling. My wife and I and the dog, we ran and got in the bathtub.”

Nearly 20 trees, mostly pines, were uprooted on Gordon’s property. A majority of those trees came crashing down on the home located at 2425 Luverne Hwy.

“Everything just started falling down around us,” he said.

Gordon said limbs from the trees as well as shattered glass and insulation crashed in on them. Afterwards, the sought additional shelter.

“She (Kimberly) grabbed the dog up and we all went to my daughter’s apartment,” he said. “I just came back to check on everything.”

According to Greenville Police Department Chief Justin Lovvorn, no injuries were reported as a result of the storm.

“It appears everyone is OK,” he said while directing traffic at the scene Saturday afternoon.

However, extensive damage was also reported to half a dozen additional homes, dozens of trees and power poles blocked major roadways and numerous Alabama Power and Pioneer Electric Cooperative customers were affected by outages.

As the powerful storm began passing through the area, two large pine trees were first reported blocking the eastbound lane of Fort Dale Road (Hwy. 263) near the Department of Transportation office. Then calls came in regarding trees in the roadway at the 900 block of Gravel Hill Road. However, multiple trees were uprooted on Hwy. 10 as well as several power poles snapped and power lines downed on County Road 50 blocking the roadway for several hours.

Although a tornado was not confirmed, Gordon has his own theory.

“I’m pretty sure it was a tornado,” he said. “It was loud and you could hear the rumbling, but the trees were a whole lot louder than the rumbling.”

Butler County Sheriff Danny Bond, who is acting as county EMA director, has reported that the damage was caused by straight-line winds.

Across the state, three people were killed Pickens County as a result of a tornado. Minor damage was reported across central Alabama.

There were also several motor vehicle accidents reported on Interstate 65.