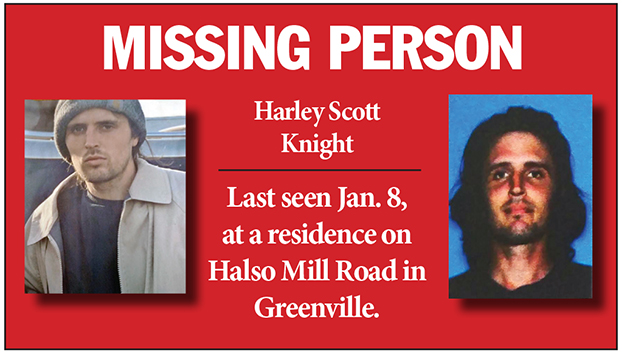 The Central Alabama Crimestoppers released information provided by the Butler County Sheriff’s Office late Monday afternoon regarding the disappearance of a Greenville man.

According to reports from the BCSO, 26-year-old Harley Scott Knight was recently reported missing by his mother. He was last seen at 6 p.m. last Wednesday, Jan. 8, by his mother at a residence located on Halso Mill Road in Greenville. Knight also called his mother on Friday, Jan. 10, from Hollywood Feeds located off Troy Highway in Montgomery.

According to the report, Knight has been diagnosed with a medical condition that causes him to get disorganized and not realize what he is doing. He does not have a cell phone with him and was last seen traveling on foot.

If you have any information regarding the whereabouts of Knight, you are asked to call the BCSO at (334) 382-6521, the Greenville Police Department (334) 382-7461 or CrimeStoppers by using the 24-hour tip line at 215-STOP (7867). You can also download our P3-tips app. Make sure you receive a Tip ID and Password in order to dialog with Investigators in case there is a follow-up question.

Your Tip may lead to a Cash Reward.