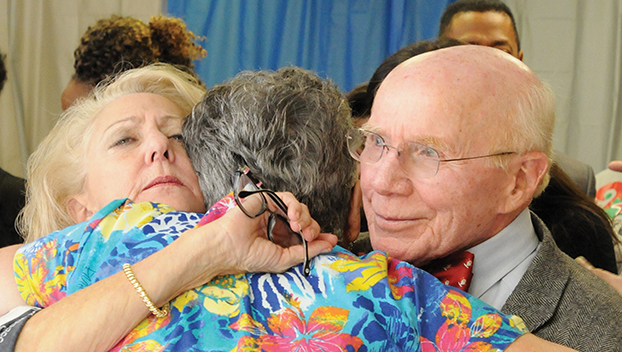 Regional Medical Clinic and Regional Medical Center of Central Alabama doctor, Gary M. Richardson, M.D., and his wife, Mary, are embraced by a co-worker during his retirement reception held at the Clinic on Dec. 18. | Photo by Mark Rogers

In December 2004, Christmas was fast approaching. For the previous 20 years, I had the privilege to work around some great people. Many very influential people in their industry.

Working with Liberty National, I learned many things that I carried on to other jobs and many lessons I still rely on when doing my job today. A brief time in furniture sales, Greenville city inspector assistant, printing supplies and sales, manufactured housing, but for the majority of the 20 years, I worked in the propane industry. A great industry with great people, but it was time for a career change.

Dr. Aubrey Stabler, in closing out my final interview for the job of administrator of Stabler Clinic, reminded me that it would indeed be a career change, that nothing about the healthcare industry would resemble the propane industry. My first disagreement — many others would come — with Dr. Aubrey had to do with his assessment… and I couldn’t hold back as I tried to convince him that the people were the same. Working with employees and taking care of the customers. Yes, the product very different, but the end result had everything to do with the how you reached what was considered a successful end.

What Dr. Aubrey said next, probably resonated with me more than anything else he had to say that day. In fact, I use what he said almost daily now.

“David, this industry has changed so much over the past five years, but will pale in comparison to what the next five years will hold,” he said.

Dr. Sheldon Kushner came on board, a retired GYN who had a successful practice in Montgomery for years, but it had been many years ago — and he had been retired for almost 10 years. We hired him, and half the battle in recruiting physicians is whether they want to be here or not. He reached out to me, he wanted to come and so we hired him. When the successful practice of Dr. Roger Smith, FP — we sure miss him — became rocked by his diagnosis of cancer, we weren’t sure where to turn. Enters Dr. Kushner, whose practice of women’s health never was able to get off the ground to compete with, as Dr. Aubrey had said, a vastly changing industry.

So you all have heard how it’s not what you know, but who you know that matters most. Sometimes it’s the friend of the friend’s brother who worked together years ago who heard the friend came out of retirement and that friend had also retired more than 10 years ago and wondered if we would be interested in hiring him like we hired his friend’s brother who had also been retired for almost 10 years. Say what? You got it!

Dr. Kushner’s brother’s partner who worked together in Maryland wanted to know if we would be interested in hiring him as a general practitioner having heard how rocked we were about the news of Dr. Smith. There would be some challenges, of course, some obstacles to overcome of course, but once again, half the battle was, he wanted to do it, he wanted to come out of retirement and he wanted to come help us.

So who was this man, this retired surgeon willing to help us? Dr. Gary Meade Richardson, M.D.

Dr. Richardson served in the United States Air Force. A VCU-Medical College of Virginia graduate, he completed his internship and residency at Ohio State University and Yale-New Haven Hospital. He stayed in private practice from 1974-99 and was the first surgeon in Annapolis to specialize in Thoracic and Vascular surgery. Dr. Richardson chose to retire in 1999 after 25 years, including nights and weekends, looking forward to his many interests, activities and hobbies.

“The medical staff and administration have always been very kind and supportive,” Dr. Richardson said. “There are only three that have been here longer than I, Dr. Duane Williams, Dr. Kanu Patel and Dr. McGowin. With the support of the administrative team and the current medical staff additions I am confident that my patients and this community will continue to be cared for and treated with the same expectations that have allowed both the clinic and hospital to serve for over 100 years.”

When asked about his future plans Dr. Richardson said that he plans to stay in Greenville, but travel often with his wife.

“Mary and I plan to home base here in Greenville, but will take the time to visit those tourist sites in Alabama and neighboring states that we haven’t had the time to do so. I want to thank all my patients for putting their healthcare trust in me and again all of the support staff, administrative team and medical staff for all they have done.”

Looking back, this community had a need, Dr. Richardson had a desire to help meet it, and that he did. Dr. Roger Smith passed in the spring of 2011, by that time changes had already occurred. The Clinic was now back under the ownership and administration of the hospital and well what the next five years would hold indeed paled in comparison to what the next five would hold.

Chad French, CEO of RMCCA, is confident that with the recent addition of Dr. Richard Giovane, M.D., Family Practice, and the current staff in the Clinic that Dr. Richardson’s patients will be well taken care of.

“We continue to recruit physicians and we will continue to look for those that want to be here and serve our community,” he said. “This a great place to live, work and to make a difference. We remain committed to people in Butler and surrounding communities and we certainly accept the challenges that healthcare will present today, tomorrow and in the years to come. I am glad Dr. Richardson and his wife Mary will be able to do those things they have been looking forward to.  I have a great respect for what Dr. Richardson has been able to do over his career(s) and it’s easy to see that his patients equally respect and love him. We will miss him, but will continue to look to the see them as they walk the dogs early in the morning… maybe not quite as early now that he will be
retired.”

(Story By: David Norrell, director of business development for RMCCA.)