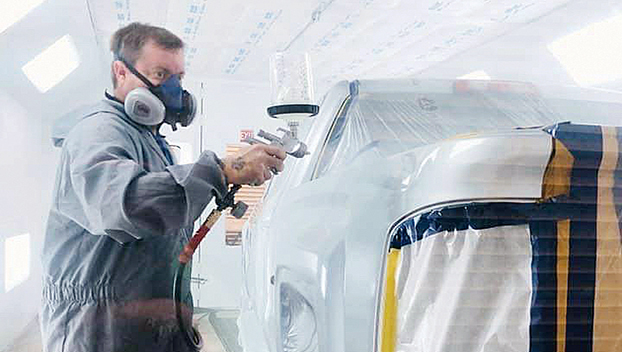 Camellia Collision recently installed a new system that is a game-changer when it comes to painting vehicles.

The company’s new downdraft paint booth is likely the only one of its kind in the Greenville area and helps make the vehicle painting process more efficient, according to Camellia Collision owner Jason Reaves, who founded the business on Aug. 1, 2018.

“We have the capacity of baking on paint,” Reaves said. “That can speed up the process making it hours instead of days. It increases productivity — it’s also a lot cleaner and filters contaminants. There is also a safety factor as it has fire suppression in it. If it gets to a certain temperature, a dry chemical is released.”

Reaves previously worked with Romeo Breau III and Romeo 3’s Collision and he managed the shop until Breau relocated to Baldwin County. In August 2018, Reaves and his wife, Janet, purchased the Greenville location of Romeo’s 3 Collision.

Reaves said the shop does a variety of work and is already expanding.

“We do collision work, window tints, bed liners and more,” he said. “We had a building built out back to do body work and that freed us up to put in the paint booth. It’s been a six- to eight-month process rebuilding it. We had to bring in an electrical engineer to get it up to code and make sure everything was wired properly. “

Jason Reaves said he is excited about being able to use the new paint booth.

“We can do any type of painting — even big rigs,” he said. “The booth is 24 feet long and 14 feet wide. I can fit a full size crew cab truck in there. We’ve been busy since we installed it. We had people waiting on us to get it done. I’ve painted a car every day since we opened it up.”

Jason Reaves said the paint booth is “a one of a kind in Greenville.”

“It’s a full downdraft unit with a pit,” he said. “It’s got a tunnel dug underneath for exhaust. It’s pressurized with a fan pushing and pulling for proper airflow.”

The shop also features another thing that makes the job smother.

“We’ve got a mixing room that went with the system,” Jason Reaves said. “It gives us a controlled environment to mix in. We have fire suppression in both.”

Camellia Collision is located on the Greenville Bypass near the Mac Crenshaw Memorial Airport.