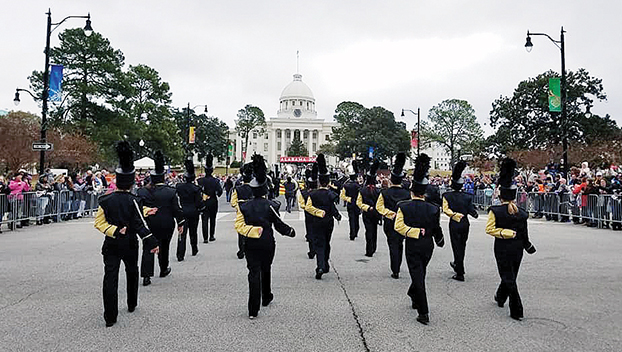 Members of the Greenville High School Marching Band march toward the capitol building during the Bicentennial Parade in Montgomery. | Submitted Photo

On Dec. 14, the band was one of only a handful from across the state to participate in the celebration, according the director Brett Johnson.

“They selected seven bands from across the state,” Johnson said. “They prepped us ahead of time and said they wanted music from Alabama and that represented the area that we were from. With us being from Butler County, we did our research  — Mobile was playing Jimmy Buffet, North Alabama bands were playing selections from the band Alabama – so our guy is Hank Williams. We played music from Hank Williams — ‘Hey Good Lookin’’”

The parade was a large and long one for the Marching Tigers.

“We started off at the Cramton Bowl and marched right in front of the capitol building,” Johnson said. “There numerous people there from all over. All of the counties were represented. I bet there upwards of 3,000 people there along the route as spectators. It was wonderful. We’ve marched at parades before, but this is the first time since I’ve been here or that I know of that we’ve marched in a parade of that magnitude. It was good and the kids got to march in front of the governor. The governor stood up and started clapping when we played Hank Williams’ stuff. It was a super honor.”

The band had an application process to be accepted and then chosen, according to Johnson.

“We went to the Bicentennial Committee and we sent a recording to the group,” he said. “We sent videos of our shows and us marching in the Christmas Parade in Greenville. We showed our resume of sorts to them. All of our performances for the Montgomery Biscuits and Bay Bears and the Atlanta Hawks helped out a bit.”

The band also recently had a tour, Christmas at the Ritz and a Christmas Concert, making for a busy season.

“We have Christmas Tour every year and this year was the first year we’ve stopped at Georgiana,” Johnson said. “We were super excited to perform at Georgiana School – and perform for them first.  Then we went to McKenzie and performed for them and then to Beeland Park to perform for the Kiwanis Club.  We capped off that tour with a visit to Country Living Senior Living. Performing for the seniors was a blessing in itself. It was great to see our kids giving back like that. I’ve always had the philosophy that we’ve been blessed with a gift and it is so important to be able to give back. You receive blessings by trying to bless others. It was a wonderful day.”

Christmas at the Ritz, and appearance before the Lions Club and a final Christmas Concert last Tuesday at GHS rounded out the schedule.

“We raised more than $10,000 for the bands at The Ritz,” Johnson said “It’s the biggest fundraiser we’ve done since I’ve been here. It was a good thing. We’re already planning on doing it again next year and maybe doing it on two nights. It was a sold-out show. We were super excited about that.”