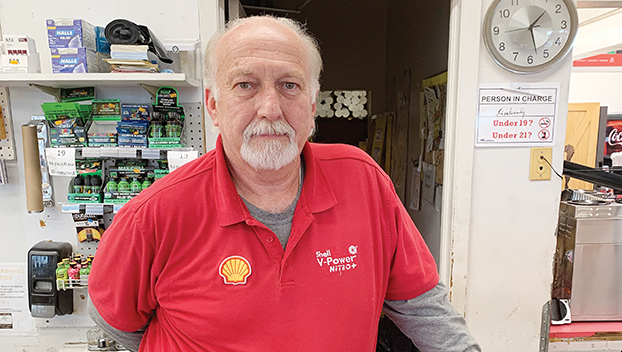 Longtime Shell Depot manager Thomas Matthews is preparing to retire on Christmas Eve. A reception in his honor will be held from noon until 5 p.m. that day at the Fort Dale Road store. | Photo by Mark Rogers

Thomas Matthews has been a familiar face for more than two decades at the Shell Depot on Fort Dale Road, however, next week, he’ll work his last shift.

For Matthews, it’s actually his second retirement, after retiring from ARA Restaurant Services previously and then working at the Shell Depot owned by Jim and Mints McGowin for the past 25 years as the manager.

Matthews will walk out of the business as an employee for the last time at 6 p.m. on Christmas Eve and those who want to drop by and congratulate him can do so from noon until 5 p.m. on Tuesday, Dec. 24.

Matthews has been busy training new manager Ursula Thomas, but took time out of his busy schedule to speak about his work Monday.

“The customers have become my friends over time,” he said. “It’s bittersweet. They’re happy for me, but they say they’ll miss having me around.”

Mathews said his favorite time at the store is early on Sundays.

“On Sunday mornings, this place has become a place for Alabama and Auburn fans to talk about the games,” the longtime University of Alabama fan and graduate said. “I’m going to miss that more than anything. It’s just fun.”

Matthews plans to “be really busy in retirement” and enjoys cooking, a passion he’s had for years.

Matthews also reminded customers that they could still get their favorite hand-dipped Blue Bell ice creams at the store — a favorite of his.

Matthews and his wife, Kimberly, also plan to do some traveling after he retires.

“I’m looking forward to it,” he concluded. “I’m just thankful for all of my friends and customers over the years.”