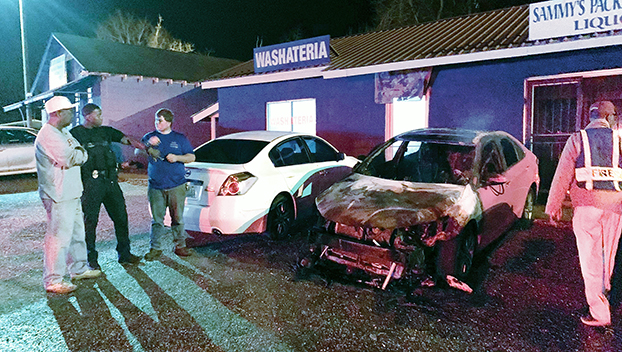 Investigators with the Fort Deposit Police Department are investigating a Monday night fire at a local business that could have been much worse.

Firefighters were called around
8:10 p.m. to the strip containing BJ’s Auto Sales, the Washateria and Sammy’s Package Store for what was originally reported to be several cars on fire with the fire spreading to the buildings.

The fire, which is being investigated as “suspicious” destroyed one car and damaged two others.

Building owner Sammy Bailey said they were “fortunate it didn’t spread to the buildings.”

The vehicle, a 2017 Toyota Camry was destroyed. The Fort Deposit Fire Department responded quickly and Fort Deposit Police Department Cpl. Rendell Johnson was just returning from the jail and getting off Interstate 65 at Exit 142 when he received the call. Johnson used a fire extinguisher from his patrol car to contain the flames and prevent them from spreading before the fire department arrived.

Fort Deposit firefighters spent more than an hour on the scene ensuring that the fire was out. Bailey said he would be evaluating the damage to the other vehicles that were nearby.