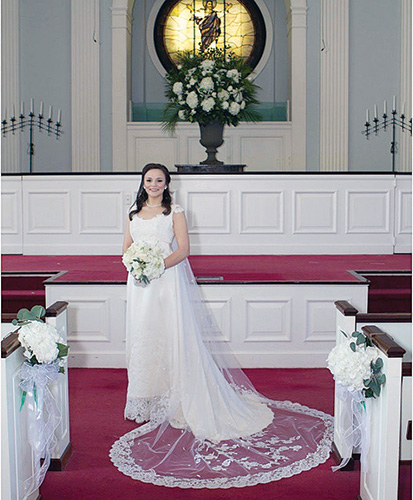 Miss Barrett Ewing Leverette and Robert Marcus Edge Jr. were united in marriage at a 4 p.m. ceremony at the First Baptist Church of Greenville on Saturday, April 27, 2019. Officiating was the Rev. Chase Clower of Greenville.

The bride is the daughter of Mr. and Mrs. John Thomas Leverette of Greenville. Parents of the groom are Mr. and Mrs. Robert Marcus Edge Sr. of Brewton.

The processional was ‘Canon in D’ by Pachelbel, the flower girls and ring bearer walked into, ‘Jesus Loves Me,’ and the bride entered to ‘Trumpet Voluntary,’ by Purcell.

Recessional for the bridal couple and postlude was ‘Trumpet Tune and Air,’ by Purcell. Mrs. Giardina’s solos were ‘How Beautiful,’ and ‘How Deep the Father’s Love for Us.’

Centering the sanctuary was a pedestaled sunburst arrangement of white roses, white gladioli, delphinium orchids, stargazer lilies, Casablanca lilies, and white hydrangea. Beside the arrangement were burning tapers in an arched candelabrum.  Additional arrangements of white hydrangea and lilies were used on either side of the alter dais.

The pews were marked with free-flowing tapers of hydrangeas and eucalyptus. The flowers adorning the vestibule tables were placed in memory of the grandparents of the bride, Mr. and Mrs. Nathaniel Davis Foster of Greenville and Mr. and Mrs. John Baxton Leverette of Honoraville; and groom, Rev. and Mrs. Robert Chester Edge, and Mr. Eugene Patrick Keenan. The arrangements were of white hydrangea and lilies in cut pedestaled vases.

Each attendant wore a formal dress of beige raw silk featuring a sweetheart neckline and a gathered skirt that fell to the floor. The attendants carried ribbon-wrapped nosegays of white ranunculus, pink roses, and white hydrangea. The bridesmaids wore pearl necklaces, gifts from the bride.

Miss Natalie Carol Gardner, niece of the bride, and Miss Abigail Cates Brown, cousin of the bride, served as junior bridesmaids to the bride. They each wore a floor-length dress of imported Swiss batiste fashioned with a square neckline and a skirt with pleats. The bodice was constructed entirely of rows of English lace insertion, its high waistline defined by wide embroidered insertion beading and ribbon. The batiste skirt fell to a wide band of insertion and edging of laces.

Miss Nancy Claire Gardner and Miss Mollie Kathryn Gardner, nieces of the bride, were the flower girls. They wore a lovely summer frock of Swiss batiste and embroidered netting lace. Panels of tucks separated the bands of lace in the skirt. The girls carried baskets of rose petals down the aisle.

Pride Piggott, cousin of the bride, served as ring bearer. The white two-pieced suit was fashioned of linen, the shirt featuring wide tucks piped in the same fabric and a pleated collar of lace and batiste finished his outfit.

The bride given in marriage by her father wore her mother’s wedding gown. The formal gown, featuring a portrait neckline, was of white peau de soie. The bodice and capped sleeves were lavishly appliqued with white hand-run Alencon lace and re-embroidered with pearls and crystals. Jeweled laces also accented the front of the controlled skirt and the hemline, which extended into chapel train. The bride also wore her mother’s full-length veil of Brussels lace. She carried a nosegay composed of ranunculus, lilies, white roses, and astilbe.

For her daughter’s wedding, Mrs. Leverette wore a formal sea-foam green gown. The A-line dress, fell to the floor and was made entirely of Alencon lace.

Mrs. Edge, mother of the groom, selected a navy blue chiffon dress.  A sheered knot created a focal point at the waist of the gown.

After the ceremony, a reception was held at the Greenville Country Club. On the table in the foyer was a design of peonies, roses, stargazer lilies, antique carnations, and white hydrangea in a cut crystal bowl. A white point de venis cloth overlay pink satin on the bride’s table. The five-tiered wedding cake was topped by clustered white hydrangea. The service table was covered in heavily embroidered pink linen and organdy cloth overlay white satin. A large trumpet vase was filled with Belles of Ireland, antique carnations, blue hydrangea, stargazer lilies, and Queen Ann’s lace centered the table.

The groom’s table was covered with a linen thread lace tablecloth bucolic country scenes were hand embroidered throughout the cloth. The cake was comprised of a stack of whimsical “books” of the groom’s choosing. Two cut glass globes were filled with starburst of hydrangea, roses, and snapdragons.

Before leaving for a wedding trip to points of interest in North Alabama and North Carolina, the bride changed to a yellow and white striped silk summer dress.