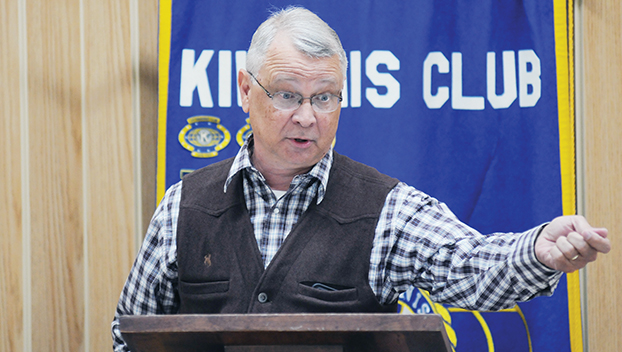 Dr. Tony Frazier, State Veterinarian with the Alabama Department of Agriculture and Industry, spoke to the crowd as part of the program. | Photo by Mark Rogers

Dr. Tony Frazier, State Veterinarian with the Alabama Department of Agriculture and Industry spoke to the crowd as part of the program, which also featured the awarding of an Alabama Century & Heritage Farm designation to Cedar Creek Plantation.

“It’s a great time to be in agriculture,” Frazier said. “Society’s perception of foods produced by farmers is often skewed. There are more than 2 million farms in the U.S. – that’s only 2 percent of the population. Today one farm feeds 166 people. By 2050, the world’s population will reach 9 billion. That’s a lot of people to feed in the next 30 years. The amount of food we produce must increase by 70 percent. It doesn’t matter if it’s pork, beef or chicken  – there’s no other way.”

Though population in the U.S. is not growing, the rest of the world is, and Frazier said the U.S. feeds much of the word with its agriculture.

“We’re actually feeding these 9 billion people,” he said. “We’re taking on the role of feeding the rest of the world. We can do it. We have the know how. We have the necessary regulations to keep it safe. We want to have systems that are encompassing and sustainable. The food that we make will be around to feed our families that are young and their children. We produce the most wholesome, affordable food in the world. We spend a dime for every dollar we earn. In some countries, it’s 60 to 70 cents of every dollar that go for food.”

According to Frazier, one cow in this country produces as much milk as 4 dairy cows in Mexico.

“It’s because of the genetic selection, feeding and nutrition,” he said. “We produce more milk with less food. Victory loves preparation. We must prepare using every tool.”

Robinson re-elected as Board of Education president