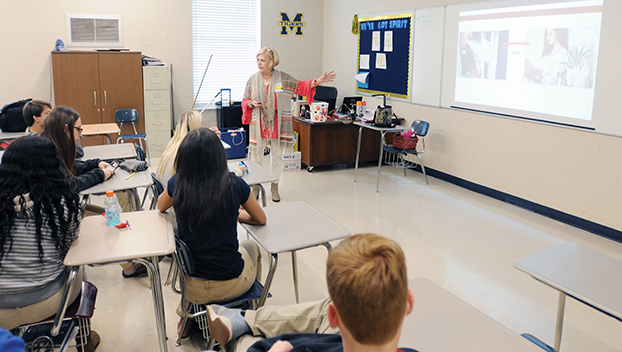 Students at McKenzie School got a inside look at the dangers associated with vaping last week.

Presenters from the Alabama Extension Agency presented the program “Escaping Vapes” to older students at the school.

“We had a two-day program for the students in grades 8 through 12,” Counselor Todd Henderson said. “The speakers presented to a different grade level each period for two days.”

Last Thursday, Margaret Odom, who is based in Chatom, used a PowerPoint to show videos and information to the students.

Odom said research is being done, but the dangers aren’t fully known.

“All we have is short-term results,” she said. “There’s no long-term research. There’s no telling what the long-term effects are going to be. There are all sorts of chemicals in vapes – even formaldehyde – that’s used in embalming fluid.”

At the school, administrators were concerned.

“It’s eye-opening,” Henderson said. “There’s been an increase in the number of young people with breathing issues.”

Each class spent an hour discussing the issues and over two days, each group had two hours of education on the subject.

“This is something they need to know about,” Brown said. “She also showing them how the marketing is geared toward them.”

Odom agreed and said manufacturers flavor the vapes so students want them.

“They’re taking advantage of them,” she concluded. “Young people are being manipulated. I’ve seeing fourth-and fifth-graders saying they have vaped.

The Alabama Board of Pardons and Paroles denied parole Tuesday offenders including one from Butler County. All totaled, the board... read more