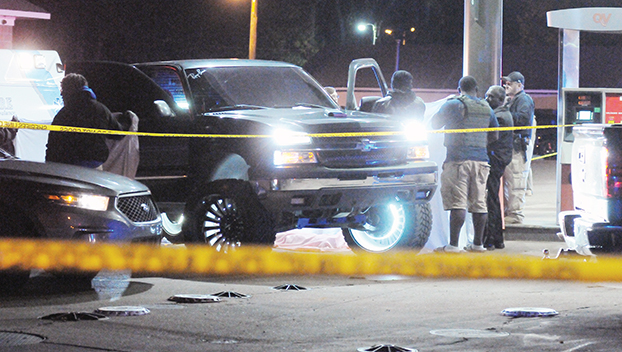 Investigators look over the scene at the QV gas station in Hayneville late Saturday. | Photo by Mark Rogers

Investigators from numerous agencies responded to the scene at the QV gas station across from the Lowndes County Courthouse in Downtown Hayneville.

The shooting occurred just after 8 p.m. Saturday, Nov. 23, killing Williams, who had been involved in law enforcement for more than 40 years, first volunteering as a reserve deputy in 1978.

Williams, who grew up in Lowndes County was a 1976 graduate of Calhoun High School and was elected sheriff in 2010 after serving as chief deputy for 10 years. Williams joined the Lowndes County Sheriff’s Office in 1987. He worked at the Hayneville Police Department from 1984 to 1987.

The scene was chaotic as law enforcement and first responders arrived to find Williams’ lifeless body on the ground near pump 8 and suspect William Chase Johnson’s truck still parked there. Johnson, 18, of Montgomery fled the scene on foot and was taken into custody nearly four hours later near the scene. The Montgomery County Sheriff’s Office confirmed Sunday that Johnson is the son of a Montgomery County deputy.

On Monday, Johnson was denied bond during his first court appearance.

“Tonight, around 8 o’clock, the Lowndes County Sheriff, Big John Williams, was involved in an incident here at the QV gas station here in Hayneville, Alabama, which is in Lowndes County,” Jarrett said late Saturday. “Unfortunately, the sheriff was shot fatally. The State Bureau of Investigation, which is a division of the Alabama Law Enforcement Agency, is handling the investigation. It’s still early. It will take some time. It is an active investigation.”

Witnesses at the scene reported that Williams approached Johnson after officers were called to the QV in reference to a crowd gathering there and noise complaints. ALEA officials did not immediately confirm the nature of the call.

“It’s a very sad time for Lowndes County and the State of Alabama,” Jarrett said. “We’ve got many law enforcement officers — sheriffs from surrounding counties — here to show their support. If any of you knew Big John Williams, he was a wonderful man. Everybody in law enforcement knew him. If you ever met him, you’d never forget him. He worked 24-7; he was an outstanding sheriff and a great friend to many people. I’m sure the citizens here in Lowndes County are deeply saddened. It’s just a sad time. We ask that you pray for his family and pray for the Lowndes County Sheriff’s Department.”

ALEA Secretary Hal Taylor was also on the scene late Saturday and spoke about Williams’ career.

“This community is devastated because John was a well liked guy,” he said. “The community just needs to come together and support the family during this time. We in Alabama’s law enforcement community mourn the loss of a dedicated brother. Not only was Lowndes County Sheriff’ “Big John” Williams a committed man of the law, but he was kind and loved by many. Our thoughts and prayers are with the Williams family.”

Jarrett said he had known Williams for a long time.

“I started out in Lowndes County as a trooper and I’ve known ‘Big John’ ever since,” Jarrett said. “I still stayed in touch. He was just a great person. This is a very said moment.”

News of Williams’ death traveled fast around the state.

“I’m saddened to hear about Sheriff ‘Big John’ Williams, who was tragically killed this evening in the line of duty,” Gov. Kay Ivey said in a release Saturday night. “Through his service to our country in the United States Marine Corps and his many years working in law enforcement, he dedicated his life to keeping other people safe. He will be remembered as a consummate professional and pillar of his community. I offer my prayers and deepest sympathies to his family and to the men and women of the Lowndes County Sheriff’s Department.”

“Tonight, Alabama mourns the loss of Lowndes County Sheriff ‘Big John’ Williams, who was killed in the line of duty,” he said. “Sheriff Williams dedicated over 40 years of his life to public safety, including 19 years as Sheriff. Please pray for his family and fellow officers.”

Marshall noted that several law enforcement officers have died across the state this year.

“Sheriff Williams is the fifth line-of-duty death of an Alabama law enforcement officer to gunfire and the sixth to lose his life overall in our state over the last 11 months. Serving the public in the role of a peace officer is a difficult calling, fraught with peril, yet many Alabama men and women choose to answer that call, often putting their lives in danger to protect us. It simply cannot be said enough that we owe these heroes our gratitude and our support. I know all Alabamians join me in passing along our condolences and prayers to Sheriff Williams’ family and to the Lowndes County Sheriff’s Office.

Murder suspect held with no bond