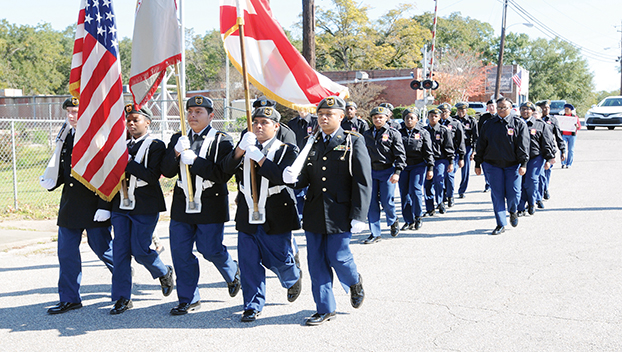 Students from both Greenville and Hillcrest-Evergreen high schools join together to lead the inaugural Georgiana Veterans Parade. | Photo by Mark Rogers

JROTC cadets marched through the streets of Georgiana followed by cars decorated full of veterans at the city celebrated its first Veterans Day parade last Saturday.

Among the marchers was Vonciel Bedgood, who held a sign thanking veterans for their service as the parade made its way through downtown and at Hank Williams Park. Veterans and participants enjoyed a brief program and volunteers handed out hamburgers and hot dogs to the crowd.

“I’ve been here over 60 years and this is the first one we’ve had in Georgiana,” Bedgood said. “I was riding down the streets in Georgiana last year and it was deserted — nobody was on the street except me. It was a holiday and I thought, ‘It’s Veterans Day and nobody is doing anything for the veterans.’ I promised the Lord and myself that if I lived to see another year, I was going to do something about it and have a parade and something to honor the veterans. They don’t get enough recognition and lots of times when they come home they are rejected by society. When you think about being a barrier for freedom and protecting us with their lives, it does something to me.”

Mayor Jerome Antone said the idea of a parade in Georgiana had his and the city’s full support.

“There’s some excitement in Georgiana and I’d like to thank Ms. Vonciel Bedgood for putting this activity on,” Antone said. “This is the first Veterans Day parade that I know of. This is what the community is all about. This is something positive. For a citizen to put this together and bring the community together is a wonderful thing. Good things are happening in Georgiana and we’ve got to continue to participate. We’ve got to come together and put things like this on. I hope the community continues to be positive and work to the one common goal and improves this town. Nothing beats positive thinking.”

Col. Alan Hester, senior Army instructor with the JROTC program at Greenville high School was the featured speaker and gave a brief history of Veterans Day, which is traced back to an Alabama veteran who worked to change the traditional observation of Armistice Day.