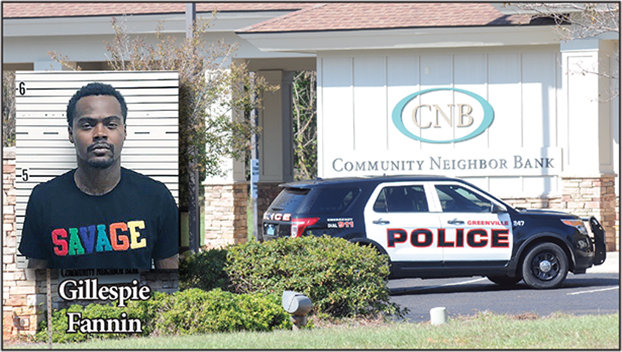 A suspect accused of robbing a Greenville bank last Wednesday was located and captured within 24 hours.

Greenville Police Department Chief Justin Lovvorn said a suspect entered the Community Neighbor Bank on the Greenville Bypass around 12:30 p.m. Wednesday, approached a teller and placed a bag on the counter and demanded the teller fill it with money.

“The teller put an undisclosed amount of money in the bag and gave it back to him,” Lovvorn said. “The suspect left the bank without further incident.”

By 12:30 p.m. on Thursday, Greenville Police had Gillespie Fannin, 29, of Montgomery in custody thanks to the work of investigators, the FBI, Montgomery Police Department and the Montgomery County Sheriff’s Office.

Lovvorn said that following the robbery, patrol officers were dispatched to the bank and secured the bank.

“They were unable to located the suspect in the immediate area,” Lovvorn said. “Investigators with the Greenville Police Department responded and began to process the scene for evidence. Investigators also interviewed the bank employees and any potential witnesses. Investigators notified the FBI, which also responded to the scene to coordinate their efforts with ours. Officers canvassed the area around the Greenville Bypass to locate any evidence or potentially useful information.

Lovvorn said GPD investigators were able to develop a suspect within two hours of the robbery.

“The suspect information was given to surrounding agencies, including the FBI, Montgomery Police Department and the Montgomery County Sheriff’s Department due to the fact that he was known to live in Montgomery.”

Last Thursday at around 12:30 p.m., Montgomery Police Department officers located the suspect travelling in a vehicle and conducted a traffic stop, according to Lovvorn.

“The vehicle was occupied by two individuals, one of whom was the bank robbery suspect,” Lovvorn said. “Greenville Police Department investigators responded to Montgomery where they, along with the FBI, interviewed the two subjects who were in the suspect vehicle. The passenger was released after questioning and the driver was arrested and transported to Greenville.”

Lovvorn said the vehicle was also transported to Greenville and searched. Several items of evidentiary value were found inside. Fannin was charged with robbery 2nd and jailed in the Butler County Correctional Facility. Fannin was also discovered to be on federal probation for another robbery charge.

“I would like to commend the patrol and investigations divisions of the Greenville Police Department for their quick response and hard work on this case,” Lovvorn concluded. “This dangerous individual was identified and arrested within 24 hours of committing the robbery. This is a true testament to the dedication and ability of our investigators who worked nonstop to ensure they developed a solid case against this individual and appended him as quickly as possible. I would also like to thank the FBI, the Montgomery Police Department and the Montgomery County Sheriff’s Department as well for their assistance in locating and apprehending this dangerous individual. Their assistance was invaluable in this case.”