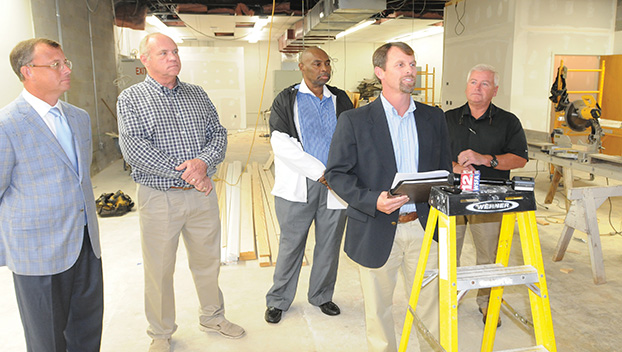 The former Alabama Power building in Georgiana will soon be home to a new pharmacy.

Georgiana city officials, Butler County officials and many others gathered in the building on Meeting Street in Downtown Georgiana Tuesday morning for the announcement.

“In the past 12 months, four businesses have closed in Georgiana,” Josh Pierce, chairman of the Butler County Commission for Economic Development, said. “Cajun Perfection, the hospital, Fred’s and Alabama Power Company have closed. That’s a total of about 70 jobs. Today, we’re here to bring some good news to Georgiana. The Butler County Commission has been working with Mr. Charles Smith for about a year and a half on the possibility of opening up a pharmacy here.”

Smith, who bought his first pharmacy in Florala in 1979, also owns one in Evergreen and announced his intentions to be a part of the Georgiana community.

“I just celebrated my 40th year with the Florala pharmacy,” Smith said. “We opened in Evergreen just over a year ago and that store is doing very well. We are actually delivering prescriptions here to the people of Georgiana that don’t have a way to go to a pharmacy to get their prescription. We think this is a good opportunity because they’ll no longer have to make a drive of 20 or 30 minutes and it’s a good opportunity for us because we’ll be meeting the needs of the community.”

Smith said when he thought Fred’s might close its pharmacy in Georgiana, he began looking to Butler County’s economic development community.

“It was a little over a year ago when we assumed that Fred’s was going to be going out of business,” Smith said. “They actually went out of business sooner than we thought. Otherwise, we could have jumped on this thing and gotten it started sooner. We’re on it full force now and we hope to be open in mid-December.”

Smith said he was currently seeking a pharmacist to run the store.

“We’ve hired one pharmacist, but we need to hire another one to work here or in the Evergreen area,” he said.

Mayor Jerome Antone spoke about the new business and said the community had suffered setbacks, but was working to come back.

“Today is a great day in the City of Georgiana,” he said. “We want to thank Mr. Charles Smith and his family for giving us the opportunity to let him bring his business here. It’s a great day for our citizens and especially our elderly because they won’t have to travel so far to get their medicine. Hold on – good things are coming to Georgiana. Good things come to those who wait.”

“This pharmacy is really going to help this area out,” he said. “It’s going to be very convenient to our elderly residents and much safer. They won’t have to get in and out of the traffic on the four-lane. This is a great day for Butler County and the City of Georgiana. We would like to thank Mr. Smith again for his investment in our county and city.”

Mike Jordan of Alabama Power said he was happy to see the empty former office filled.

“When the business decision was made earlier this year to close this office, it was a tough decision, but we had in our mind that good things were still in store for Georgiana,” he concluded. “In the days after the announcement was made, Mr. Smith immediately reached out to ask about the building. We are a proud partner. The commitment the company made when we chose to leave this area was that we may leave a brick and mortar building, but we’re not going to leave the community behind. I hope that today’s announcement is another opportunity to demonstrate that commitment.”