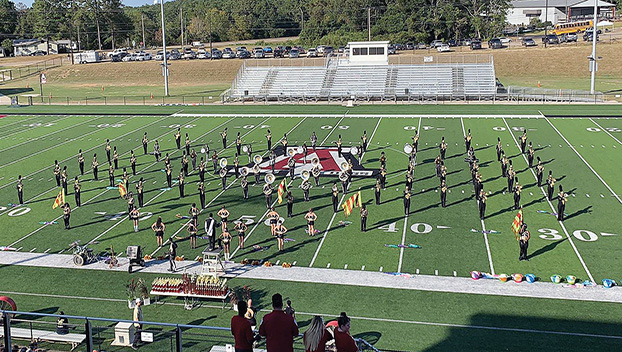 The Greenville High School marching band has received superior ratings at all three competitions it has competed in over the last few weeks. The band is pictured above during the Andalusia competition last Saturday. | Submitted Photo

Greenville High School’s Tiger Pride Marching Band has been making its mark across the state in competitions.

The band competed last Saturday in Andalusia at its third contest of the year and brought home superior marks. The band got a “1” in drum major, percussion, dance team, and three” 1” rankings from the judges for overall performance. The band also won “Best in Class” for majorettes.

The scores were similar several weeks ago, when the band was part of two competitions in one day, traveling to Rehobeth and Daleville and getting similar results with each, including “1” rankings for drum major, percussion, colorguard, dance team, majorettes and individual “1” rankings from each judge for an overall “1.”

“It’s been a busy couple of weeks, but it’s been a good couple of weeks,” GHS band director Brett Johnson said. “ Two weeks ago it was a very long day with the two competitions. I got to the band room about 5:30 a.m. or so and the kids started to report around 5:45 a.m. As soon as we had enough light to go out onto the practice field to run through the show, we had a mini-practice. We hopped on and bus before 7 a.m. to start heading to Rehobeth. We got off the bus there, warmed up and went straight to the field for competition.”

Johnson said he found out the results about 30 minutes after the band competed, but didn’t share them until later.

“I waited until the Daleville contest that evening to tell the kids,” he said. “It was a daunting day — a long day. We got back to Greenville close to midnight. We were already tired, because we had the McKenzie game that night. We didn’t get back from McKenzie until around 11 p.m.”

The band traveled to Andalusia last weekend and had more of the same when it came to results.  Johnson said the band is finished with competitions for the season but still has a lot of performances to go.

The parade will take place on Dec. 14 in downtown Montgomery.

“We were going to go to another contest next week, but since we made that parade, and we’ve got a lot on our plate, we chose to go to the parade,” Johnson aid. “We are one of eight bands selected form across the state — that includes university bands.”

The GHS band also has another outdoor concert set for Nov. 7 and the time has not been determined. “We want to start it about 45 minutes before the sun sets,” Johnson said. “It’s been such a wonderful year for the band so far. We’re growing and getting bigger. We’ve gotten a lot of positive and educational feedback from the judges this season. The parents are happy, the kids are happy and you couldn’t ask for anything more.”

The Marching Tigers have a big show planned for Friday night as well.

“This Friday is a special Friday,” Johnson said. “It’s Military Appreciation Day. We are doing a special pregame show and we team up with our ROTC. We will have a big American flag on the filed and we’ll play the five military branches songs and we want the veterans and active military members to stand and be recognized when their song is played. This is a big one for us — the community really looks forward to it. Everybody enjoys it.”