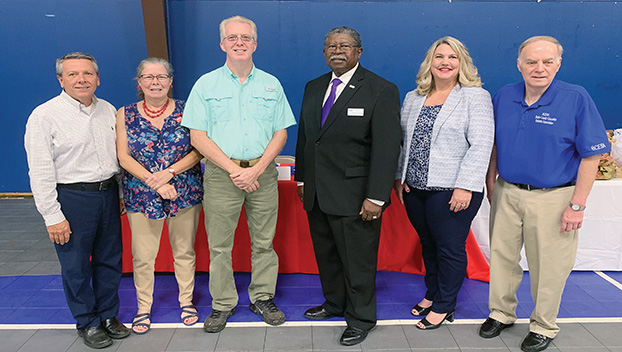 The Oct. 1 meeting of the Butler County Educational Retirees Association was a busy one and included a lot of business and several speakers for the group.

The meeting took place at the Dunbar Community Center and was attended by more than two-dozen members. BCERA President R. Wayne Boswell greeted the guests and made mention of a flu shot clinic being held at the meeting by the Alabama Department of Public Health.

Annie Crenshaw spoke to the group about Butler County’s Bicentennial Celebration that is set for Nov. 2 with events taking place downtown from 10 a.m. until 3 p.m.

“We will have a little bit of something for everyone,” Crenshaw said. “It will be a lot of fun.”

The event will center around Commerce Street in the heart of Downtown Greenville and in the adjacent multi-block area including Pioneer Cemetery. The event will not only celebrate Alabama’s 200th birthday, but Butler County’s. Butler County was founded on Dec. 13, 1819, and is a day older than the State of Alabama, according to Crenshaw.

“We’ll be inviting people to come in historic costumes,” she said. “We’d be glad to have you come in clothing from an era. We’ve got 200 years of history to cover. The event will have all sorts of food, fun and fellowship.”

The group was also reminded of the Retired Teachers Day Brunch to be held at the Butler County Board of Education boardroom at 949 Oglesby St. on Wednesday Nov. 13 at 9:30 a.m.