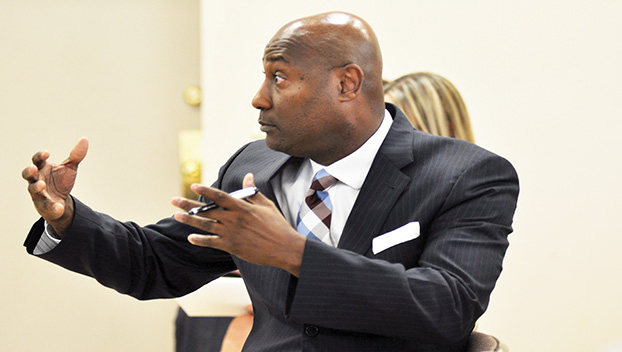 New Greenville High School principal Jamie Howard speaks to the school board regarding issues with cell phones in school. | Photo by Mark Rogers

A work session before the Butler County School System meeting last Thursday focused on concerns about cell phone usage and policy in the schools.

Superintendent Dr. John Strycker had asked the Board and administrators to look at the District’s current policy and make any adjustments needed.

Currently, students in the Butler County School System are allowed to bring digital devices on campus for educational purposes including laptops, netbooks, tablets, e-readers with internet capabilities and smartphones (including iPhone and Android devices, Blackberry, etc.).

“I just wanted to get Board members and administrators thoughts as we move forward,” Strycker said as the meeting began. “We really have a policy now that is pretty strong.”

Board President Lois Robinson said the fact that the meeting had to be called meant that the current policy is not enforced or is being enforced in different ways at different schools. Board members Brandon Sellers then asked principals for their thoughts.

According to the policy, use of the device will only be allowed when permissible according to the teacher. Devices can only be used in the classroom with teacher permission, not in the lunchroom, hallways, restrooms or other common areas. The policy includes items such as not being able to use to cheat on tests and post images and videos from classrooms or the campuses. Students are supposed to be limited to being allowed access to websites and resources that are relevant to the curriculum and content in the classroom.

“At Greenville High School, I’ve had major issues with social media,” new Principal Jamie Howard said. “I see now that it is an issue.”

Greenville Middle School Principal Bryant Marlowe said use at his campus is not necessary.

“We don’t need cell phones at GMS,” he said. “Either they can have it or they can’t have it.”

Board members and administrators kept the discussion going for more than 40 minutes as they went point-by-point over the current policies. Some suggested students checking their phones at the door of a classroom, which brought up theft and other concerns, In the district policy it states that the schools/system will not be responsible for lost or stolen devices. Physical damage or loss of data is not the responsibility of the school system. As with any items on school campuses, school officials may inspect the any personal device when there is reasonable suspicion that contents are a violation of policies, or of any local, state or federal laws.

“The Bring Your Own Device (BYOD) initiative is designed as a privilege, not a right,” the policy states. “This privilege may be revoked for an individual, group, or entire student body at the discretion of the school administration, Students must use their devices responsibly.”

Board member Lois Robinson agreed there is a problem, but said the Board and administrators need to look at the solutions.

“You can’t put it all on the teachers,” she said.

Board members also expressed concern that social media use contributes to “fights and upheavals.”

Near the end of the current policy it states that supervision and monitoring “It shall be the responsibility of all members of the Butler County Board of Education staff to supervise and monitor the usage of the online computer network and access to the Internet in accordance with this policy and the Children’s Internet Protection Act.”

“I wouldn’t change anything I see,” Howard said of the policy. “Whatever we decide, we will be dealing with the students and the parents.”

“We need to keep talking,” he said.

Strycker said the board and administrative team would continue discussions on how best to enforce the current plan.

Baseball, law, constitution all relate according to Finkleman