Baseball, law, constitution all relate according to Finkleman 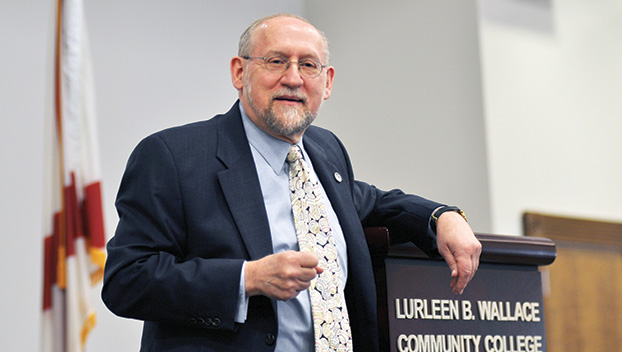 Students from around the area learned about constitutional law with a little bit of a baseball twist thanks to Dr. Paul Finkleman.

Finkleman, president of Gratz College, was the keynote speaker for Constitution Day activities at Lurleen B. Wallace Community College in Greenville Monday and he addressed the game of baseball and how it helps to shape American attitudes toward law and constitutionalism. Finkleman addressed a crowded room of students including several groups from Fort Dale Academy, Georgiana and McKenzie during his presentation at the Wendell Mitchell Conference Center.

“The rules of baseball are kind of like the constitution,” Finkleman said. “Baseball has its own legal system, with judges (umpires), statutes (the rules) and even common law understandings of how to apply the rules. Americans play and watch baseball and develop a respect for the rule of law as well as an understanding that the rules are sometimes applied with flexibility.”

Finkleman, who was the chief expert witness in the lawsuit over the ownership of Barry Bonds’ 73rd home run ball, which was caught by one fan and ended up in the hands of another fan, drew analogies for nearly an hour with the students assembled.

“The baseball bat is a lethal weapon,” he said. “Yet when an umpire calls you out on a third strike, you don’t’ attack, you walk back to the dugout. The umpire — the judge — has made a legal ruling. The strike zone can be compared to common law. You may have to figure out what that particular umpire’s strike zone is on a given day. The rules state where the strike zone is, but it is up to the umpire to determine what he will call. It is like the Supreme Court rethinking the words of the constitution. They interpret the words of the constitution.”

“Until the umpire makes that call – ball or strike — safe or out — nothing has happened,” he said. “Everything that happens in a baseball game is ratified by a judge. Unlike football or basketball, in baseball everything is tied to the judges. We grow up accepting this. The arguments in baseball are how you interpret the law. In the legal system, you have the right to appeal. The same goes in baseball, for example with a check swing that may be called a strike by the home plate umpire, but the batter appeals to the first and third base umps. Baseball and the courts allow flexibility in the rules.”

The event was funded by the LBWCC Title III Strengthening Institutions Grant.