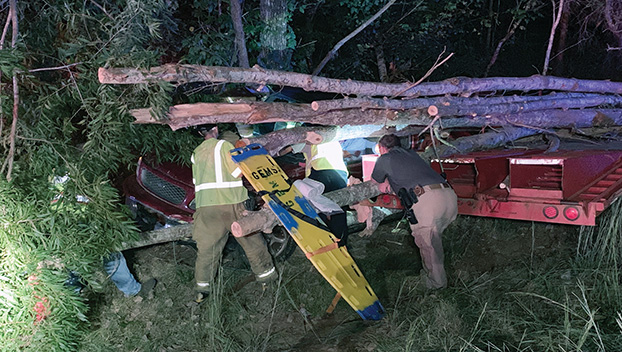 A crash Monday night near the Lowndes County line injured at least one person and left a load of logs spread along a local highway.

Butler County Sheriff’s Office deputies were dispatched to AL-263 less than a mile south of the Lowndes County line around 9 p.m.. Greenville Fire Department and Liberty Volunteer Fire Department were also dispatched and crews worked to free a man from the truck. When the truck left the roadway, logs crushed the cab and firefighters had to cut logs off the truck to free the person that was trapped. Extrication took more than 20 minutes.

GEMS ambulance took the subject to the Regional Medical Center of Central Alabama for treatment. There was no word on his condition. Firefighters also treated another man at the scene for minor injuries.

Crews remained on the scene for the more than an hour.

No further details were available as of press time.